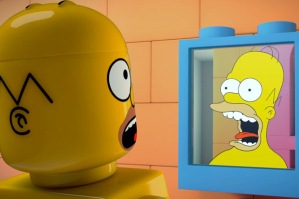 It’s a fact of life that if you haven’t been LEGO-cised, you haven’t made the cut. Since the building blocks’ humble beginnings, we’ve seen stormtroopers, hobbits and even Jesus Christ himself get the prestigious ‘LEGO treatment’. Now, in an inevitable move that was probably inevitable before I was even born, America’s favourite family go plastic in Season 25’s latest episode, ‘Brick Like Me’. Is everything awesome? Or should fans of both ‘The Simspons’ and LEGO be bricking themselves?

The story deviates between the animation of the cartoon sitcom and the newly-devised playset, Little Springfield, where ‘everything fits together and nothing gets hurt’. LEGO Homer is living a fairly average, domestic life, going about his everyday business as a LEGO citizen until he begins to realise that, away from this world, is a teenage daughter waiting for him to spend quality time building LEGO.

From the word go, the writers want to assure you that this isn’t a blatant, commercialising stunt to sell more LEGO or Simpsons’ merchandise (I’ll let the new Simspons’ LEGO range of toys speak for themselves). It’s a classic Simspons’ conundrum with real heart and poke-in-the-side humour, except that heart is plastic and your side is detachable!

With regards to its plot, the team behind ‘The Simpsons’ assured fans that they wouldn’t write this episode unless there was a reason for doing so. Centered around this dream come true (it’s not just me, surely?) are themes about parent-child relationships, alternate realities and the need to grow up. The story creates a balancing act between ‘one of Homer’s shenanigans’ and leaning on ideas of LEGO; however, despite needlessly introducing ‘the bad guy’ and ending the episode as a dream sequence, it does (literally) fit together quite nicely.

Littered throughout the episode is a lovingly-adorable sense of humour, where schools can be rebuilt from a kit ages 12+, car-crash victims can be built back together and LEGO is the basis of religion. The writers do well not only to rejuvenate some well-timed theatricality into a struggling 25th season, but use it to complement both LEGO’s sense of humour and its own. Not only that, but you’ll want to watch the episode two or three times to find all of the LEGO easter eggs – ‘You’re going back from where you came from – Denmark!’ being one of them!

In terms of animation, the team have done a brilliant job in re-creating the city and its characters in glorious plasticity. The episode showcases the skill that the designers on this dedicated cartoon have and why others have been trailing in its dust for almost 25 years. Not only that, but timing the episode in a year where ‘The LEGO Movie’ and ‘LEGO The Hobbit’ have marked their presence was a smart move indeed. If this episode was a move to boost their dominating profile – well played, sir, well played.

Despite my own and other fans’ initial worries, this episode overall presented to the world that not all titans have to clash. With a warm story, a fresh coat of humour and more plastic than you can find at a Toys R Us, ‘Brick Like Me’ just shows that these two industry giants still have it – and that almost everything is awesome.