Freshers week at Derwent College was marred by a string of incidents provoking animal welfare concerns and complaints from local residents.

An inter-block competition set by the college’s JCRC included challenges such as eating a whole onion, licking the York Minster and getting a student from York St John University to say that the University of York is better.

One challenge saw freshers luring a member of the campus waterfowl into their accommodation.
Eyewitnesses claim one student took the task a step too far, throwing a duck from a third-floor window The fate of the duck is unknown.

The competition was later cut short due to “unforeseen circumstances”, according to the Derwent Jcrc Facebook profile.

Derwent JCRC Chair Rosalie Dowding said: “The duck being thrown out of the window is entirely fabricated, if it has happened it certainly wasn’t within the interblock challenges!

“Someone did stroke a duck but that was as offensive as it got.”

Other antics saw one fresher streak through campus while another student got his nipple pierced.

Ben Leatham, YUSU President said: “The level and diversity of waterfowl in York is something we are very lucky to have.

“YUSU, and I’m certain Derwent JCRC, don’t condone any activity that may harm the wildlife on campus.

“It is incredibly important that all JCRCs avoid any event in the future that may encourage similar behaviour.”

Railings were also put up surrounding the fountain outside D Bar after a fresher took an evening swim in the lake during Freshers’ Week.

It is not known if the events are connected.

JCRC Chair Dowding said: “The railings were put up for general safety, no one’s fallen in that bit yet…

“But it seems like they were overdue anyway because it was pretty dangerous to anyone with impaired sight.”

A party held in Eden’s Court attracted complaints from local residents, with one describing it as an “impromptu rave”.

A letter of apology was later sent out to residents living around the accommodation for Derwent College’s nursing students.

The letter claimed prior agreements regarding noise levels “were not consistently adhered to on the night”.

Dowding said: “We received a few complaints on the night, but the music was completely cut off by 10.30pm, which is half an hour before it is legally considered a night time offence anyway.

“I delivered letters of apology from the college the next day, to ensure that residents didn’t think that it was Halifax making the noise this time.

“Whilst on my travels, I bumped into one delightful resident who said that she didn’t mind at all because she had once been a fresher too.” 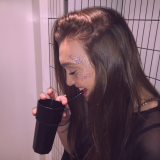