American Hustle was effortless cinema at its best. The script bounced along through a swirling tempest of ever-increasing anarchy, outrageous 70s fashion choices and competing personalities, weaving together a central thriller narrative, neatly and perfectly interspersed with astutely crafted comedy. David O’Russell has succeeded in not only crafting a fabulous film but also bringing together five leads who almost seamlessly link together to deliver an electrifying ensemble performance and one of the most assured line-ups of recent years.

Christian Bale is completely unrecognisable as conman Irving Rosenfeld, complete with huge beer belly and catastrophic comb-over. He’s everything bad about the 70s: terrible dress sense, ridiculous hair style and excess in all the wrong reasons. He also is, for all his panicking through the film and concern about how things are spiralling out of control, the centre and reference point for the rest of the cast. Everyone is there because of him, but Bale exercises masterful restraint and instead of straying into melodrama keeps American Hustle the right side of thriller territory.

That being said this is the wrong film if you’re looking for extended action sequences. As pseudo-villain of the piece, Jeremy Renner’s Carmine Polito is actually just a politician trying to do the best for his constituents without using the best means and Bradley Cooper’s Richie DiMaso, despite being a super smooth and hip 70s stud doesn’t walk around brandishing his pistol and threatening to knock people out to get the result he wants. Tension and implied menace drive the plot: the anticipation of the con getting discovered and the conspirators getting found out.

Unfortunately for the boys though, they’re almost entirely outshined by their female co-stars. Surprisingly though Jennifer Lawrence’s Hollywood Blitzkrieg is derailed in the film. That’s largely due to a superb tour de force from Amy Adams as intriguing and captivating Sydney Prosser. Easily the most intriguing personality on show in the film, Adams cycles through the entire emotional spectrum and manages to steal the thunder from Lawrence’s deranged Rosalyn and the three male leads. In the context of the plot, Sydney’s there to pose as an English Lady to lure investors into a corruption scheme on the pretext of having, “London connections.” Adams and the script make her so much more influential and enable Sydney to become the leading light of the cast. She’s an empathetic ‘other woman’ but she doesn’t let it give her a secondary role. She’s at the forefront and is a partner, and even at some stages the instigator of hers and Irving’s plan. Adams conveys easily the performance of her career, delivering conviction and emotion and the performance of the entire film.

That’s not to discredit Lawrence, who is superb in a scene where she sings along to Wing’s ‘Live and Let Die’, while cleaning the house and having ratted Irving out to the Mafia. She also has possibly the most fabulously ridiculous 70s haircut of the entire film which should be a huge mark in favour of her getting a Best Supporting Actress nod.

It’s difficult though, even for a Lawrence super-fan like me to try and find fault with Adams as the lead actress of the piece. She has more than double the screen time, but she matches up to it and isn’t lazy whenever she’s on screen.

American Hustle is what cinema should be. You’re immersed in an entirely believable world, the cast zing with attitude and intent and most importantly you come away having enjoyed yourself and been entertained for two hours, as opposed to twiddling your thumbs and going to the toilet every ten minutes. Most crucially though, it shows Hollywood is finally learning to push its leading actresses to the forefront instead of prioritising their male counterparts. 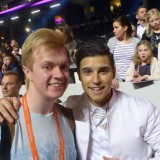