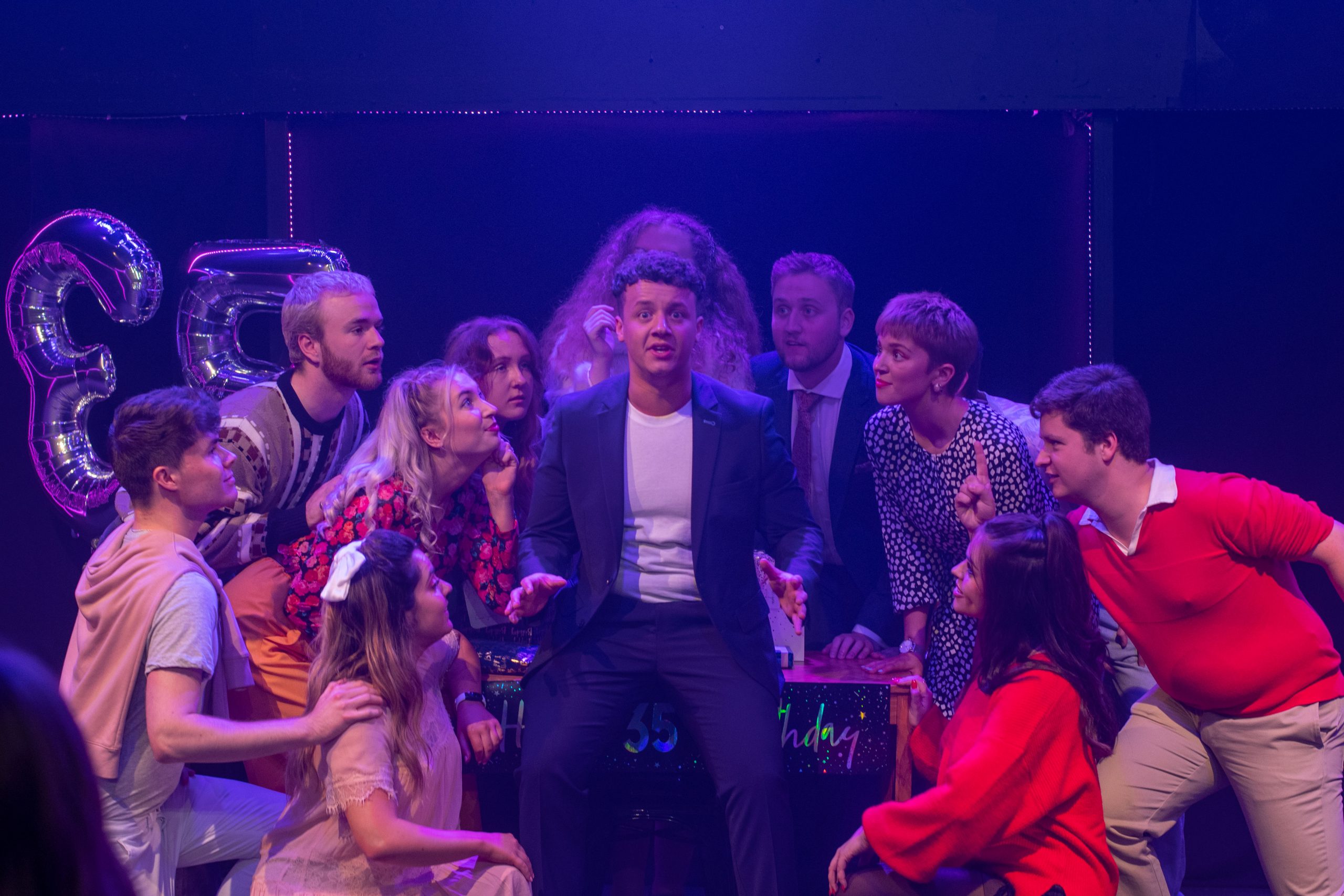 “Phone rings, door chimes, in comes company!” The moment you step foot into [email protected] the Central Hall Musical Society’s production of Company welcomes you into their world. From the happy birthday balloons, themed cocktails, and Alicia Hartley serenading the audience as we find our seats, even the theatrical atmosphere of this show is something special.

‘Company’ follows bachelor Robert (Bobby), as he navigates turning 35 surrounded by his married friends, and questioning whether he is ready and wants to get married or if he should just be happy with life as he knows it. The five couples all have their own problems and hurdles to overcome, which are shown through a series of date nights witnessed by Bobby. Whilst on the surface the themes of loneliness, fear of marriage, and the trials of commitment may not resonate with university students, CHMS uses the immersive musical to draw audiences into the show and keep them engaged throughout this exploration of love and life in NYC.

Reuben Khan leads the show as relatable and likable narrator Bobby, capturing his vulnerability, charisma, and budding hope with ease. Bobby, and Reuben, walk the audience through an emotive and thoughtful ride from start to finish, opening on sarcastic humour at the prospect of his upcoming birthday and ending with an emotional rendition of ‘Being Alive’. This song alone is worth the ticket, as is the gorgeously lit and powerfully acted final tableau of Bobby simply sitting alone in his apartment.

The rest of the ensemble works fabulously as both a group and individual characters, generating bubbly and energetic group numbers, alongside more character-driven marital problems.

The group’s pitch-perfect rendition of ‘Company’, and the bouncing, bubbling notes of ‘Bobby’ that accompany it are perfectly friendly and overly optimistic and are bound to be ringing in the audience’s ears for days to come. We also adored the numbers ‘Another Hundred People’ and ‘Someone is Waiting’, for their creative choreography, simple and effective costuming, and immersive skill at bringing the streets of New York into the heart of this old York theatre.

A character-driven show, it is Bobby’s variety of loud and interesting friends that bring the most humour, joy, and intrigue to this production. Bouncing from dinner party to dinner party, Bobby introduces us to all his married friends and their equally interesting problems.

Lorna Capewell and Jamie Williams personify the fight-filled, secret-driven relationship between Sarah and Harry with immense humour and energy and a very fun karate fight.

Mille Gee Land and Adam Lambe’s Susan and Peter are so sickly sweet you can’t help but question, and laugh along, with their notion of being divorced.

Izzie Norwood and Will Harvey as Jenny and David create a smoky and hilarious weed session, with Izzie’s full-body characterisation drawing cackles of laughter across the audience.

A true stand-out moment was Alicia Hartley’s performance as the neurotic Amy, who on her wedding day to Paul (Alex Timotheou), gets cold feet. ‘Getting Married Today’ was a fantastic number, a perfect mix of humour, and fear, all of which Alicia captured marvellously, with incredible vocals. A special mention should also be given to Alex, who joined CHMS’s production of Company later than the rest of the cast (although you would not be able to tell), and he embodied the role of calm, reasonable Paul.

And it was an especially lovely touch to add the same-sex coupling of ensemble/dance captain Tara Wilkes and fill in/choreographer Nicole Kilama within George Furth’s largely heterosexual plot.

Of course, no production of Company is complete without a mention of Patti Lupone’s iconic role Joanne, played this week by Poppy Houlihan. Poppy’s version of ‘Ladies Who Lunch’ is rich and powerful, with Poppy commanding the stage with such a full presence you could assume she’d been possessed by Patti herself. Louie Roberts as Larry is a fantastic and enjoyable completion to this couple, spirited dance moves and all.

Director Anna Gallon thoughtfully brought Company into the modern world, opening the show with Bobby taking a selfie with the whole audience; a great way to make it feel as though you are one of Bobby’s friends at his birthday party. [email protected] is an intimate theatre, but this worked perfectly for the immersive feel of the show. The space is used thoughtfully and cleverly, with a simple set and shining lighting transporting the audience across New York – from Bobby’s apartment, to an open-air terrace and on to a club. The transition between each scene was practically seamless, keeping you grounded in the world of ‘Company’.

The costuming, set, choreography, band, ensemble, and intimate space all intersect perfectly to create a welcoming and immersive musical experience, brimming with humour, emotion, heart, and a zest for life. In the wake of Stephen Sondheim’s passing, it is an immense joy to hear his timeless music brought to life, equal parts classically complex Sondheim and modernised NYC vibes creating a spiel of catching and entertaining songs.

There is so much to love about this production of Company, and it was clear that the audience absolutely adored the show, with cheers of support throughout and a well-deserved standing ovation at the end. CHMS has truly created something magical, where each aspect of the production works together in harmony, and where the chemistry of this perfectly cast ensemble does more than just create intriguing characters… it envelopes the audiences into the world too.

Company is playing until the 18th of June, and with tickets selling out fast this is not one to miss!