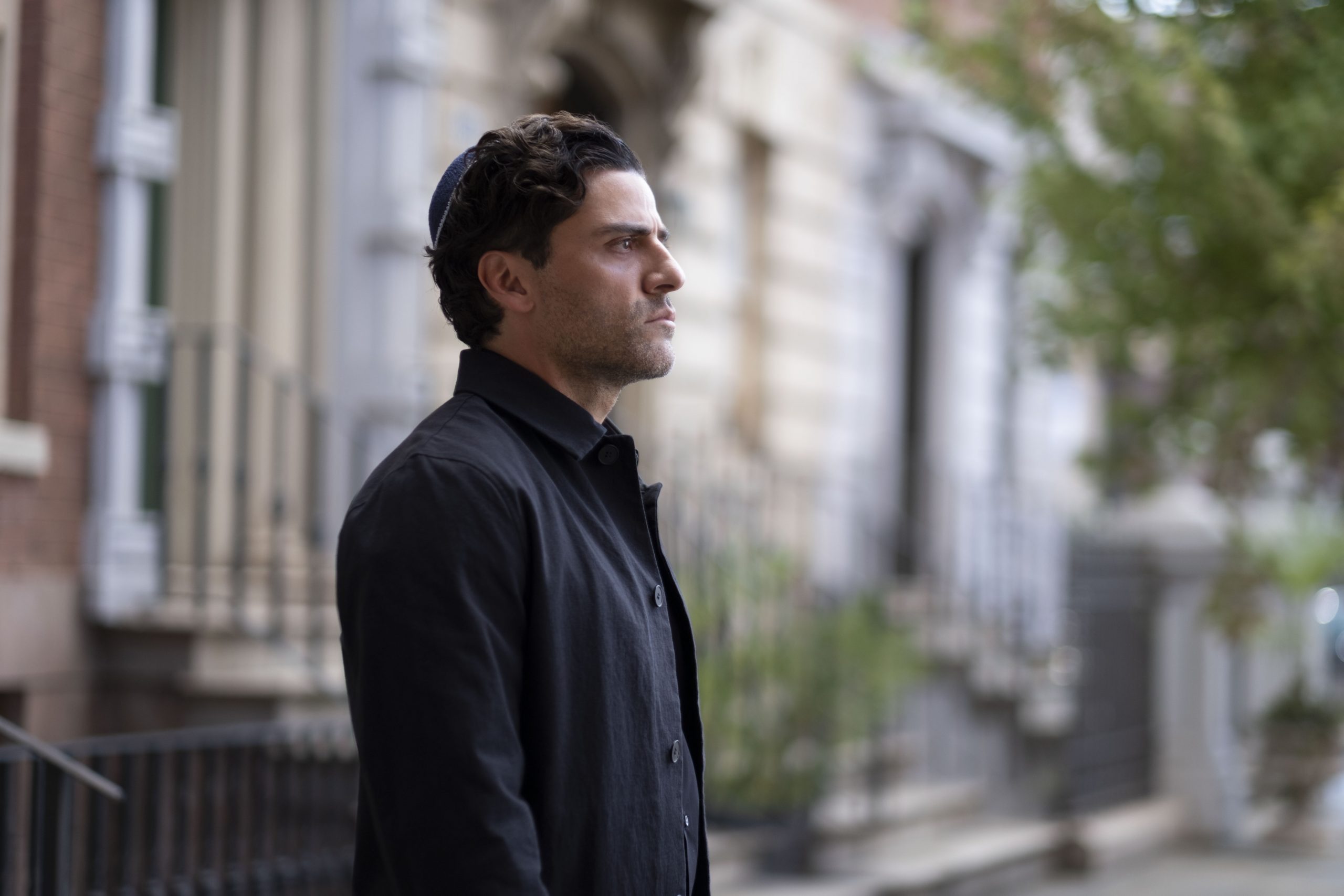 How does the dissociative identity work? When did this situation begin? And the ultimate chicken and egg quandary, who came first, Marc Spector or Steven Grants?

The answers to all these and more come tumbling out in the penultimate Moon Knight episode, through a deeply emotional tour de force that leaves Steven Grant solidified, Marc Spector emotionally vulnerable and Oscar Isaac reaching for that inevitable Emmy nomination.

After last week’s mind flip exodus, expectations were high and theories were rife. Any variety of adventurous escapades or Egyptian afterlifes would have appeased fans, but Marvel goes deep, orchestrating a detailed character exploration by cracking open the psychology of their lead character(s) and meandering thoughtfully through Marc’s past.

Equal parts reflective and presentative, this episode is a breathtaking detour and jumps through shots and scenery with the playfulness of a Nolan film, layers within layers of past, present, imagination and afterlife swirling around Marc and Steven.

We begin with the trickling of water, the pleas of a child, the anguish of a mother and a jump cut to the orchestra of screaming that bookend Episode 4- previewing the migration of cuts and time periods that make up this chapter.

Episode 5 bounces jarringly between three stark environments: the frame story in the Egyptian afterlife, the organising principal of Harrow’s office and the psychological journey through the distinct rooms and memories embedded within the mental hospital.

Immediately obscuring our understandings of what is true, Marc returns to Dr Harrow’s office, receiving a stern lecture on his violent behaviour as the camera cuts drastically between differing angles and shot sizes (including the distinct use of a reflective table) as a pendulum sound swings. Audiences are left disoriented and asked to question if this whole show we’ve witnessed is “sense or nonsense”, and which is the coping device- Harrow’s benevolent hospital or the ‘real’ world, which currently houses the Egyptian afterlife, multiple variants of the lead character and a humanistic hippo.

Marc’s range of emotion takes off here, bouncing drastically between fatigued and cooperative, threatened and suicidal, and back to focused and protective when alongside Steven; struggles which provide the real fuel of this explorative episode.

The framed storyline within the Egyptian afterlife is relatively straight forward. The hippo goddess Taweret (complete with animalistic instinct, dramatic flourishes and papyrus flashcards) is our entertaining and likable guide through the afterlife, even if she’s a bit out of practice. She confirms that Marc and Steven died- the Egyptian afterlife of the Duat is one of many “Intersectional plains of untethered consciousness”- and they are on a ship traveling towards the Fields of Reeds. The exterior setting of a golden deck and rolling sand dunes contrasting nicely against the stark hospital interior, even if the CGI sometimes felt a little lost.

And thus begins the true goal of this expedition: to ensure Marc and Steven’s hearts are in balance with the feather of Ma’at (truth) before arrival, lest our heroes are swallowed by the unclaimed souls of the sand sea.

To do this, Marc and Steven must unveil the truth of their relationship, wandering through the rooms of the hospital, delving into the layers of their memories and consciousness, and revealing the full horrors of Marc’s past.

Honestly, it’s powerful to witness. The scenes transition seamlessly together, with set pieces flowing evenly and Steven pushing through, further and further into layers of childhood trauma in an effort to finally understand who he is. Marc is hesitant, angry and fearful, trying desperately to slow Steven down, to protect him from the truth. This whole middle act is wonderfully executed and heartbreaking to watch as we float along with sweet Steven.

Then, in a brief desert interlude, Steven and Marc witness the aftermath of Layla’s dad’s murder, Konshu’s interference in Marc’s suicide attempt and the sensational creation of the Moon Knight. Manipulated from the start, this incredible scene puts the Konshu/Marc relationship into context, with the powerful choral accompaniment, dramatic lighting and the slow construction of the suit around this hopeless Marc making for a very powerful and dynamic midpoint.

As Steven creeps closer to the core of his purpose, Marc’s emotions rise, an alarming crescendo of “You can’t make me” triggering a dramatic return to the clutches of Dr Harrow, who encourages Marc to open up to Steven.

Back in their childhood bedroom, Marc unveils the true crux of this traumatic history- that his mom was abusive and hit him, so he created Steven Grant, a place to hide from the trauma and a persona who is ignorant of and protected from the damage of his childhood.

I won’t lie… it’s difficult to watch Steven come to terms with his fictionality in this way, and meaningful to watch Marc drag him out of the horrific room, protecting him one last time- “You’re not meant to see that, that’s the whole point of you.”

Steven gets his own tantrum, his refusal of the truth (“let me out”) provoking a turn with Harrow; a cautiously polite encounter and the gradual, hesitant, tear-stained acceptance that Steven’s mother is, in fact, dead (despite his constant phone calls earlier in the series).

At this disclosure, the scene collapses into the previous funeral of Marc’s mother, promoting the emotional climax of this episode (and possibly the entire show), with Marc’s decomposition and expression of trauma rippling into the re-emergence of this childhood Dissociative Identity Disorder, and the subtle decisive flip to a naive and calm Steven kickstarting this entire series.

Certainly a “this changes everything” moment, for fans a rewatch is in order, and for Steven this revelation provides the chance to reassure and heal Marc (“It wasn’t your fault”), fully accepting his purpose as a comfort device.

And just in time too- back on the ship, the scales never balanced and the unclaimed souls of the Duat are waiting to pull our boys into the sea of sand. Marc fights them off and Steven claims his moment of glory- reconciled with his identity complex he realises “If I’m you, I’ve got this too”, taking charge of his bravery and fighting back.

But we barely get time to wallow in the joy and pride shared by these two friendly constructs because, in an effort to save Marc the Original, Steven the Fictional is pulled overboard into the sea and slowly solidifies into hardened sand. It is brutal, it is devastating, and yes, I’ll admit, it is narratively necessary. The reconciliation is complete, Marc is healed and no longer needs Steven, but good god(s) it was sad.

This emotional devastation passes and, soul whole again, Marc’s single remaining heart balances and he is transported to the Field of Reeds, awash in a golden light which fades naturally into the credits.

This episode hurt. A lot. And yet it was also a miraculous gift for Marvel fans and casual viewers alike. Narratively enthralling, it presented an array of necessary answers and character backstory, hit all the right emotional notes and, as such, was wonderfully depressing to watch. As a full Steven fanatic, I was devastated to see him go, but relieved he got such a brilliant farewell- goodbye loveable goofball.

And alternately, I was particularly enthused to see Marc healed and vulnerable, and am looking forward to explore what impact this new sense of self has on his personality and actions throughout the final chapter.

A deeply explorative experience, Oscar Isaac dominates this penultimate episode, with his versatile, honest and layered acting taking full advantage of the varied emotions and dramatic moments of this psychological endeavour. As has been the case all season, Isaac’s dual characterisations drive the plot, with this episode in particular truly pushing our leads to extreme psychological boundaries- if it were ever a time for a Marvel Best Acting Emmy win, it’s this episode.

The array of immersive musical choices, contrasting set pieces and excellent castings (particularly the young Marc/Steven and Oscar Isaac’s brother as body double) were phenomenally well executed and, despite a few iffy CGI moments and fleeting body double inconsistencies, this episode was one of Marvel’s best technical successes.

Reminiscent of Wandavision’s penultimate venture into Wanda’s past, “The Asylum” maintains this show’s ability to take old formulas and twist them in new ways, building a powerful emotive climax, a fascinating expression of Dissociative Identity Disorder and laying out the pieces for a refreshing origin story. If this is the intriguing direction that Phase Four is headed, then we are in for some incredibly thoughtful new stories and a true display of what time, passion, effort and a little bit of Disney’s big money can create.

Set for release in an energising week for Marvel fans, whether Moon Knight’s finale links in with Doctor Strange in the Multiverse of Madness is yet to be seen; however, this is guaranteed to be a must watch final episode, in what is turning out to be a miraculous addition to the MCU’s television collection.

Favourite Quote of the Week:

I am without a doubt too sad to pick a ‘favourite’ line this week, but I’ll do my best. Somehow Steven managed to sneak in some incredibly sweet and sometimes even funny moments into this week’s heartbreaker, but dominating my memory are the painful conflicts of emotion between Steven and Marc, and some of those most harrowing scenarios and lines.

I will say that the motto for the Tomb Busters movie now takes on a tragically meaningful position for Steven, Marc and the viewers at home, “When danger is near, Steven Grant has no fear”- so simple and yet it speaks wonders about the creation of Steven and the pain of young Marc.