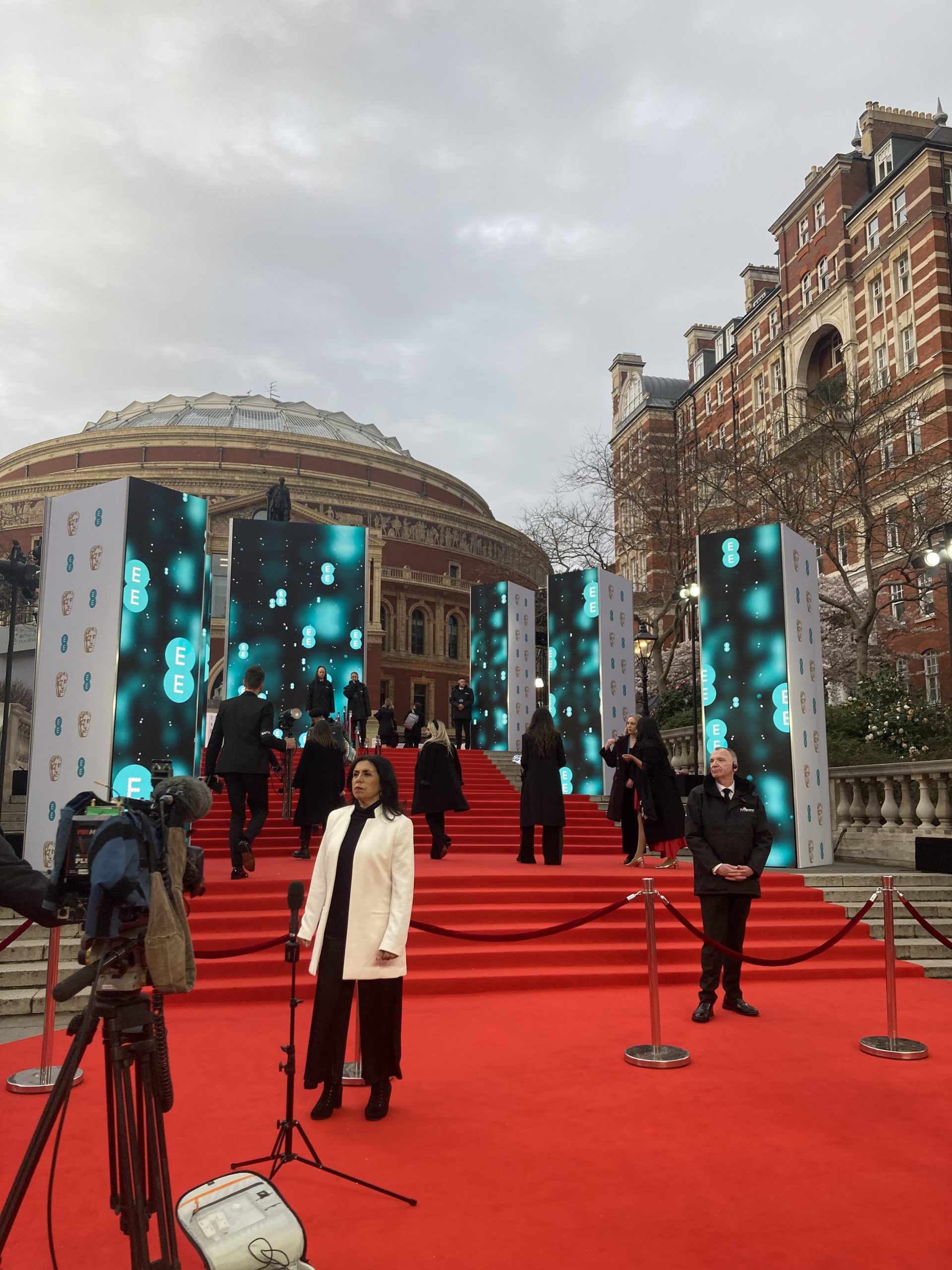 To attend the British Academy of Film and Television Awards is to be amongst some of the greatest and best dressed filmmakers, performers, and celebrities the world knows, a night of glamour and celebration for all. Or it means jumping into a pen with hundreds of fellow fans and autograph scalpers, dressed to the nines in hoodies, jeans and coats, hoping desperately to get a second of attention from Benedict Cumberbatch.

Certainly not as glamorous as one might hope, but an adventure to say the least..

Us lucky lottery winners arrived at the Royal Albert Hall around midday and readily waited in a rainy line for a few hours as bags were searched, names were checked and a cute explosives dog examined our bags in turn (honestly the hero of the Baftas).

Then, after a brief but rushed stint walking the red carpet (and taking as many selfies as possible), I found myself in a long crowded pen-like area and began the frustrating task of finding a short-person spot to stand.

While the more celebrity accessible areas near the car entrance and the hall doors were very crowded, the middle section in front of the cameras and interviewers had largely thinned out into two rows, where some lovely fans let me in and some not so lovely autograph scalpers refused to bunch up.

The red carpet began quite tamely as spatterings of largely unseen and therefore unknown creatives arrived, excited for their big night as nominees. These vital crew of composers, directors, visual designers, writers, etc. were not asked for autographs as most fans saved their voices and pens for the likes of Gaga and Cumberbatch. However, I was lucky that some around me recognised a few of this immensely talented crowd, resulting in autographs from composer Alan Pemberton, director Celine Sciamma and Spiderverse director/Mitchells vs the Machines producer Phil Lord.

Then like someone had flicked a switch the energy ramped up, as acting nominees began sauntering down the carpet, doing interviews, signing posters, taking selfies and largely enjoying their time in the spotlight. We saw the likes of Renate Reinsve, Harris Dickinson and even newcomer Woody Norman (who signed all his autographs with a smiley face).

My theatre heart soared as Mike Faist and Ariana Debose danced past, rushed toward an array of interviews and nominee obligations. Deaf actor and BAFTA/Oscar nominee (later winner) Troy Kotsur was dutifully interviewing too when one autograph fanatic yelled “Troy, Troy!” – to which an interpreter humorously responded “He’s deaf, mate”. Later on I signed “I love you” (thank you CODA), to deaf ‘A Quiet Place’’ actress Millicent Simmonds – and she signed back. A very exciting moment for ‘both’ of us! ;)

It was surprising how much the energy ebbed and flowed, sometimes electric and other times passive and doding, with everyone just waiting for the next celeb arrival. But even when there were no stars, it was interesting to watch the BAFTA staff at work, and all the effort compiled into making the event happen. A man with a vacuum even milled past at one point, cleaning the carpet and having fun with his moment of fame.

With an hour left to go a surprise protest from the Extinction Rebellion threatened to derail the carpet in front of us, with security blockading the area, however some celebs still chose to walk past our area. The crowd surged and the protestors chanted as the likes of Stebastian Stan, Florence Pugh, Daisy Ridley, Simon Pegg, Daniel Kaluuya, Andy Circus etc. raced past, signing as many autographs and taking as many photos as humanly possible. It was electric, exhausting, but oh so exhilarating to be close to so many superheroes.

And then just as the sun was descending and the public was waning … bam Lady Gaga arrives! “And the crowd goes wild.” All principles of human civilisation dissipated as the Queen of the Red Carpet floated by, waving and posing for the forest of phones that ascended; a hoard of selfie attempts so that later everyone could prove that… yes, they were in fact within metres of Lady Gaga. The GAGA created by Gaga.

And it is here where even the most civilised of attendees descended into a babel of barbaric beatlemania. Due to the sheer noise of the event, to get a glimpse or a photo of a well known carpet walker the screaming of their name is necessary. My voice felt like a night at Flares afterwards.

It also felt a bit dehumanising, for both the celebs and the fans, and made me question why celebrities and event organisers continue allowing fans to attend in this manner. Surely it can’t be enjoyable for the nominees? Or easy to control and organise for the producers? Particularly with all the security measures and unexpected protest risks. But I guess the visceral atmosphere of passionate fans is a part of the red carpet vibe, with promotional benefits for the awards show itself? And I was certainly glad to have the chance to be a part of it!

And that being said, the film fans themselves were lovely at working together to get the attention of fellow fans’ favourite actors. The shared passion toward film and the immense joy shown by the few around me was palpable. It was more the autograph scalpers who were pushy; taking over the carpet and exploiting any celeb visit for monetary purposes. One near me was outraged at the possibility for protesters to derail the event – not because he liked films but because he was “trying to make money here.” This mix of goals accurately personified the duality of the event- a once in a lifetime night to remember or a capitalist money making machine. It really began to feel like the best and the worst of humanity in one pen.

And then, as the interviewers packed away their cameras and the clocks struck five, Emma Watson arrived, signed a ton of autographs and then, right before my section, took off like Cinderella late for the Ball/Baftas.

For us, however, the fairytale was over. We were shepherded out of the fenced off areas, back onto the carpet (cue the surge of speedy selfies and impromptu photoshoots), rushing us back out the gates and into the bare streets of London. Once again we were ordinary civilians, walking amongst non-famous strangers, and hurrying to get the tube home.

Sure, the carpet was sheer chaos and an example of the many hateful human attitudes of greed and entitlement.

But it was also the most incredible encounter with fame, excitement, and the power film has in making us feel like we are friends with these actors who will never know or remember us, and yet who impact us throughout our day to day lives, on a vast array of levels.

The glamour, the glitz, the drama, the joy that erupts at these events was spellbinding to witness and that afternoon will surely live (rent free) in my mind for years to come, as I annoy all my family, friends and mere acquaintances with stories of my selfie with Florence Pugh and my brief dusts with fame… I mean Lady Gaga and I are pretty much BFFs now.