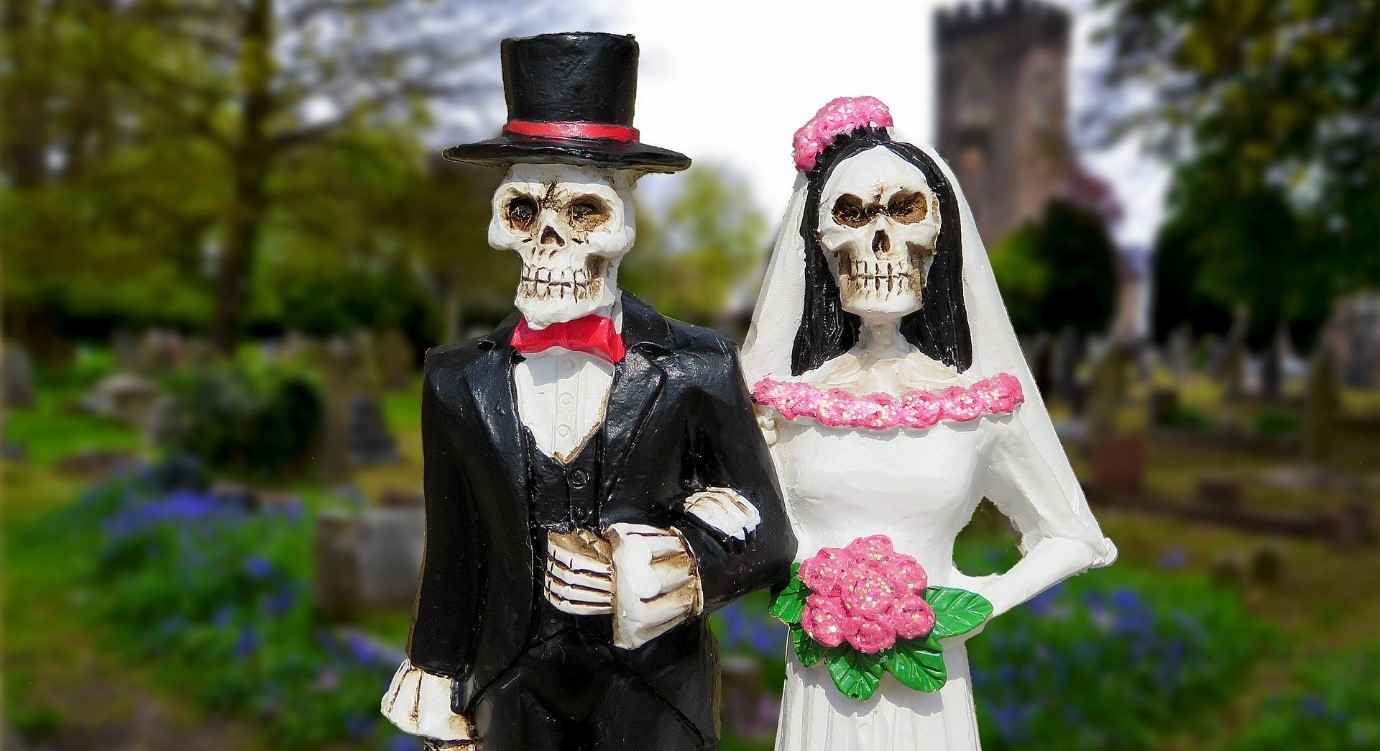 It’s that time of year again, and, fortunately, there’s no pesky lockdown getting in the way of all our theatrical fantasies! If you and your partner are seeking some gruesome inspiration or unique prompts to revive the flame of diminishing creativity, take a gander at our list of creepy and creative costume ideas for Halloween 2021.

Nothing says weird and wonderful (emphasis on the weird) like this A-list couple. They’ve hogged the headlines recently after revelations of drug-fuelled soul-searching trips to sacred land, with Fox claiming she “Went to Hell” after consuming a hallucinogenic ‘medicinal’ concoction often used by Indigenous tribes. It’s also been revealed that rapper MGK wooed the Jennifer’s Body star with three simple words – “I am weed” – during the couple’s first date, sweeping Fox off her feet. They’re a strange match, but it seems their oddities compliment one another’s holistic lifestyles. Nauseating, discomforting, and eccentric all at once, the peculiar power-couple provides perfect Halloween costume inspo.

A player & a guard from Squid Game

Reckon you could beat the great game and win immunity from death with only a *handful* of bodily and psychological scars? Then this costume is for you! The Squid Game players parade around in comfortable green and white tracksuits – an easy outfit to throw together particularly if you’re short on time. Sew on a number, and you’re ready to play! Plus, get your partner kitted out in a red bodysuit, and you’ve got yourself an ever-present guard watching your every move! Who said romance was dead? Don’t forget, it’s against the rules for guards to reveal their identity, so finish off the look with a face shield emblazoned with a circle, triangle or square.

Throwing a Squid Game themed Halloween party? Put your cooking skills to the test and challenge your players to the infamous honeycomb game!

It’s time to think outside the box and get knitting (or ask Grandma, up to you). The premise is simple: one half dresses in woolly apparel, ideally in the colours of red, white, and blue to represent the Great British flag, and your significant other slips into a black or white morph suit with a cardboard cut-out of a ‘golden’ medal pinned to the front. A long piece of fabric stretched from the apex of the ‘medallion’ and fastened around the back of neck completes the DIY get-up. Golden metallic paint is easy to come by, and this is the perfect outfit for patriotic Halloween fanatics who love to engage those creative juices.

Colin and Connie the caterpillars

We all remember the chocolate caterpillar saga which ensued during the early months of 2021. Colin, the velvety, chocolate log decorated with a beaming face and colourful buttons from M&S was unexpectedly and shockingly rivalled by Cuthbert, a copycat caterpillar created by Aldi. The stand-off shook the nation, and Brits anxiously waited for the outcome of the proceedings on the edge of their seats. But did you know that Colin has a spouse? Her name is Connie. She sits lovingly besides Colin in the bakery aisle, her slender body embellished with edible pink and white heart-shaped confetti. If you currently find yourself embroiled in a love triangle fit for an episode of The Jeremy Kyle Show, then this tasty trio is the perfect costume idea. That way, nobody gets left out! I for one would pay good money to see Cuthbert, Colin, and Connie hitting the town and having it out over a greasy kebab or Viking’s Pizza at three in the morning.

I’m reluctant to say they were a power couple, but this pair certainly had their quirks. They would literally kill for each other, how romantic is that? Well, maybe not, as it turned out, but still, they were an addictive couple with unpredictable personalities which kept viewers invested. Goldberg’s outfit is straightforward: a pair of jeans, a plain t-shirt, and of course, the invisibility cap. Granted, the third season of You saw Joe’s disguise falter when he was caught red-handed on CCTV, but clearly the hat gives him an air of self-assurance we all aspire to achieve. Love’s outfit could be tricky, as there’s so many occasions to pick from. A full-proof outfit involves a pinafore to protect her clothes from flour, sugar, and the blood of her victims. Accessorise with a rolling-pin-murder-weapon.

For those who attend the University of York, this one is self-explanatory. Who wouldn’t want to dress as York’s most iconic goose? Of course, there’s only one Longboi (and don’t you forget it), so you’ll have to decide who is going to mimic the tallest goose in the county, and who is going to dress as a lay goose; the proletariat fowl of campuses East and West.

Joseph Rowntree and a packet of Fruit Pastilles

Joseph Rowntree was born and bred in York and spent most of his days advocating for social change and, most importantly, inventing sweets (some of which you might find in your bucket after a night of trick or treating). Rowntree is an important figure in York. We’ve all heard his name and the instrumental work he achieved. Most famously, Rowntree is the founder of the delightful delicacies we indulge in today. Some sweets, like the rainbow-coloured Smarties, are reminiscent of happy childhoods and Christmas. But the do-gooder had some skeletons in his closet. A lesser-known fact supposes he married his late wife’s cousin, but we’ll brush that under the carpet for now. The humble fruit pastille was originally created in 1881, and it’s also one of my confections of choice. Hence, the Joseph Rowntree and packet of Fruit Pastilles outfit was born!