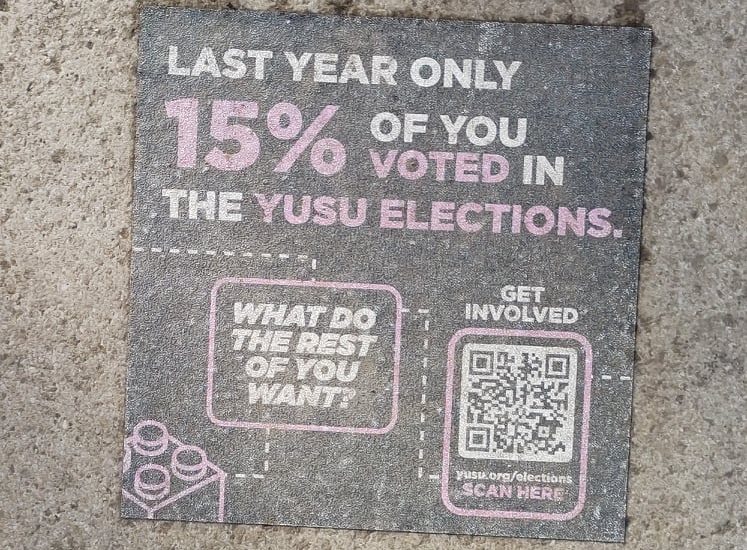 IN 2021, 85% of students at the University of York did not vote in the YUSU Elections. While this result is not unusual in comparison to the turnout for student union elections across the UK that number still indicates that a significant majority of students are not engaging with YUSU.

Current Activities Officer Sophie Kelly used to be one such disengaged student. “I was very much one of those people who didn’t understand what YUSU was or what it did” Kelly told Vision.

“In my second year I got an email from YUSU advertising for people to go on their policy and review group… I got on it and kind of went through and understood a bit more about how students can suggest policy in that area and how people can make change.

“I thought that was very interesting, but also very dry.

“I was like, this isn’t engaging for students, how could students relate to this?’” Kelly’s first officer role in YUSU was as Accountability and Scrutiny chair in the last academic year. Kelly told us “I kind of put my name out there not expecting to win, because whenever you put yourself up for election, it is absolutely terrifying and if anyone says otherwise they’re lying.

“After that it was like, oh, maybe I should think about being a Sabb.

“I realised there was power in the union… I felt I had things to offer because I had an understanding of how the union worked but also had the outsider perspective in that I had never felt a part of the clique.”

Kelly successfully ran for Activities Officer in last year’s elections, which occurred during a national lockdown. “During the election campaign I used to just be on my laptop or phone all day in my room campaigning.

“You could go out for these daily walks, and I felt really paranoid when I did… I kept feeling like people were looking at me when I left the house.

“I said this to all the other candidates and they were like yeah, we feel the same.

“But overall I really enjoyed the campaign element… it’s not something you’ve been through before, most people have never done anything like this before.”

Harleen Dhillon’s route into being the current Working Class & Social Mobility Officer was through a different path. Dhillon told Vision “I wanted to become more involved in the University, and I felt that being a part of the student union would be a great opportunity to do that, and get to know more
people.”

Dhillon also noted that “as the Working Class and Social Mobility Officer role is rela tively new, understanding the role and what it entails is not really emphasised to prospective candidates which is something I hope will happen in the future.

“I also feel that PTOs do not receive as much exposure, which may be due to the fact they are part-time, however, I believe that greater exposure to these roles would encourage more candidates to apply.”

One of the biggest stories this year was the backlash to YUSU signing a further contract with York Parties. “I knew there was going to be some form of backlash” said Sophie Kelly. “I was confident in the decision, but there was more and more and more that came through…

“There was a night where stuff was coming through on Yorfess and that was the night before my Grandad’s funeral which was really emotionally draining.”

“At Freshers and returners people were screaming in my face and coming up to me when I was on my own verbally and physically intimidating me… that had all been stoke by these kinds of anonymous pages, and throughout this whole process is for some of the things people were saying I had no evidence for… which makes you think why are people doing these posts in the first place and what do they have to gain from it?

“Coming out the other side of it, I feel a lot more resilient.

Kelly went on to tell us about her experiences of the pages before this. “Even when I was a student, if I saw something on Yorfess or Yorkmemes I thought it was gospel… sometimes, if you don’t hear about
things outside of these pages, have they actually happened?

“We definitely need to be careful and I hope any Sabb team in the future doesn’t have to go through
what I had to go through.

“This is a problem we see all across the country, there’s a lot of universities that have it far far far
worse than anything we’ve seen in York.

“It needs a nationwide policy solution that maybe we need to work with NUS or the government with.”

Both Kelly and Dhillon said they did not exactly know what their roles involved in hindsight. Dhillon explained, “I did not really understand the remit of my role, in the sense that my manifesto points seemed possible, however it was much more complex than expected.”

Kelly went further, saying “I didn’t really know what I’d be doing on a day to day basis,
I knew the key issues but didn’t know how that would manifest itself into a working day.

Kelly was also surprised by “how much time things take, nothing is ever quick at all, you might think something is straightforward and often it’s not… we could do some work to make it a bit clearer what it actually means to be a Sabb.”

“There are some really easy aspects of the role” Kelly continued, “But then some of it is so high level.”

“[However] you get weeks and weeks of training and it’s very comprehensive. What isn’t clear about the Activities Officer role is that the job is kind of to manage disputes within societies, and it can be really toxic, students don’t always behave the best towards each other or YUSU staff.

“That’s not the reason I did the role at all, you’re never going to enjoy every aspect of any job but that for me has been the most challenging.

“It can be a challenge to accommodate all these different voices, especially when people are saying completely contradictory things…you’ve got to detach yourself from the situation sometimes and look at the data and see what the majority of people want, but don’t neglect underrepresented groups either..

“We get so much autonomy as Sabbs, we get so much guidance and support but essentially it’s up to us to lead on key issues.

“I’ll be the first to admit I have made a lot of mistakes and we should’ve done things differently, but if I hadn’t made those mistakes I wouldn’t necessarily have learned from those and I think that’s made me better at the job and a better person.”

In her role, Dhillon mentioned the biggest challenge was “trying to get the bursary applications to become more transparent has been a struggle, and something I hope the next Officer pushes for.

“It would be great to have a guide on what officers can do, and how they would go about challenging policy/schemes which have been put in place at the University for a long time.

“I believe there are sufficient resources available [for PTOs], it is just about making the time alongside your academics to make full use of them.”

However, being a YUSU officer does have its positives. Kelly said “I’ve really enjoyed
[the working environment], it’s quite fast paced, you get to see your policies come to life and work with so many different people. I think the staff at YUSU don’t get enough credit, they work tirelessly to make sure students’ needs are met, and being around that environment is supportive and really refreshing.”

Dhillon added that “I have enjoyed talking to people from a variety of different positions in YUSU; the skills I have gained in this role have been invaluable.”

Both Kelly and Dhillon ended by giving advice to future YUSU officers. Dhillon said “It is a great opportunity to get involved with the University and teaches you a variety of skills that you cannot develop
elsewhere.

“The most important takeaway is that your role as a PTO is determined by how much work you choose to put in, so choose wisely as to what you can accomplish, and what may need more time.”

Kelly concluded by telling students to “put yourself forward for it because it’s a great experience, but also back yourself.”