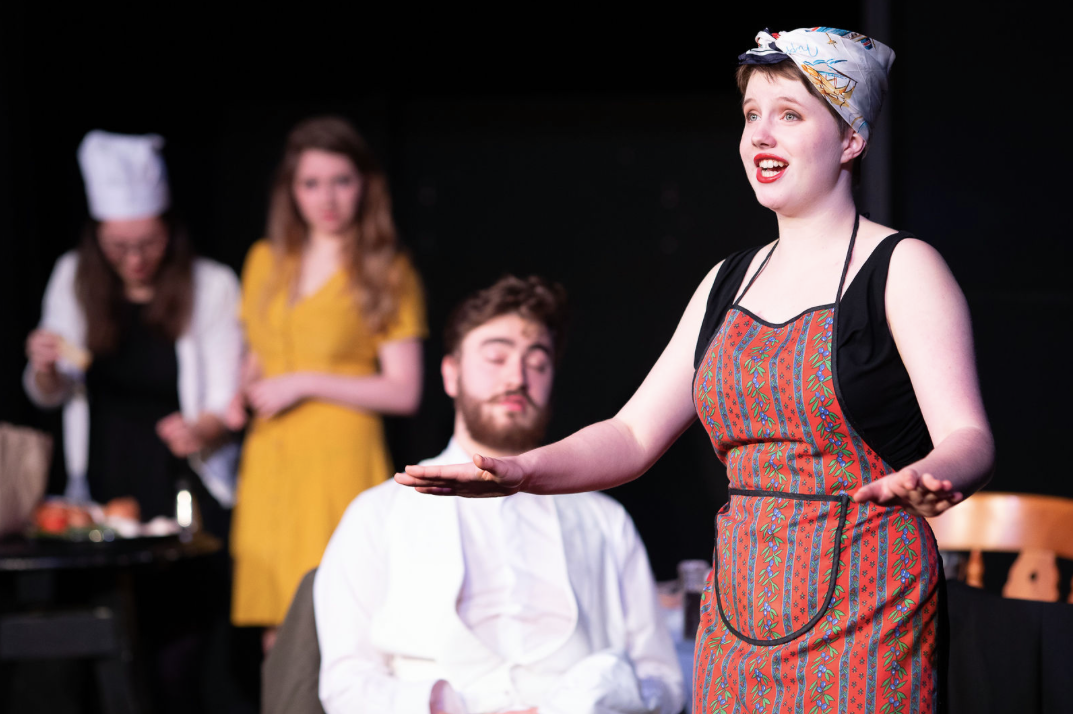 What a strange afternoon I spent at the [email protected]! I don’t really know what I was expecting to see given the names of the operas being performed by Operasoc: A Dinner Engagement and Trouble in Tahiti. The first one is a one-act comedy opera written by Lennox Berkeley (1954) and Trouble in Tahiti is also a one-act opera (not a comedy), composed by Leonard Bernstein in 1951.

A whole set of tables and chairs were organized in the style of a cabaret. As I was wondering where the orchestra was, the lights went off, and suddenly, the first notes came from the ceiling. Everybody looked up to see all the musicians sat in a narrow mezzanine running along the walls of the room. It felt like the music was coming from everywhere above us. This kind of surprise is the reason why I love going to shows so much! Unfortunately, the music sometimes overpowered the voices of certain of the singers, which was a shame.

Things only got crazier as Lord Dunmow (David Valsimidis), wearing an incredible Mustache stylized à l’italienne started singing, ‘Salt, pepper, olive oil. The chopping board, the colander. Where is the colander? If it comes to that, what is a colander?’ These are not exactly the words one expects to hear at the opera! And yet the whole of A Dinner Engagement is set in a kitchen. It is the story of the impoverished Earl and Duchess of Dunmow (Sofia Swenson-Wright) who prepare dinner for the Grand Duchess of Monteblanco and her son Prince Philippe, in the hope of arranging a marriage between Philippe and their daughter Susan.

The most staggering characteristic of this first opera was the discrepancy between the solemnity of the opera and the topics treated. The music of A Dinner Engagement is rather classic but very cheerful. Strings and flutes are dominant. On several occasions they pick up and get all excited! It was so pleasant to listen to! The discrepancy between solemnity and comedy was also illustrated by the costumes of the actors. Sofia Swenson-Wright wore very elegant high heels, a beautiful black dress, ravishing red lipstick, and, cherry on top, a pretty yet funny scarf wrapped around her head.

Some of the topics raised in the opera are nevertheless quite modern. Lady Dunmow wants her daughter (Darcy Thorpe) to look ‘soigné’ for the prince. She believes a girl should like to wear dresses and makeup, to which her daughter disagrees, which gives place to a joyful argument!

The opposition between traditional and modern conceptions of a women’s place is also raised by Bernstein in Trouble in Tahiti.

It is the story of an American couple, Dinah and Sam (Alexandra Mather and Ed Lambert) that drift apart a little more each day. Both of them try and get closer to each other but it is too hard for them, to the point that they lie about their lunch plans when they bump in each other on the street. The two of them cannot communicate with each other, which gives birth to wonderful scenes where both of them stand on either side of the stage, singing how they long to get back in touch with their partner. The superposition of their voices was quite moving. It is terrible to think that Bernstein (who also composed the music of West Side Story) wrote this opera on his honeymoon.

The overall atmosphere in this second opera was radically different. In a word, it was very American! A trio (Hannah Ambrose, Dom Sutton, Oliver Turner) opens the opera and makes regular appearances, always singing the same warm and jazzy tune in which the clarinet and the drums are dominant. Like estate agents would do, the trio seems to be selling us the American-way-of-life in the suburbs of New York.

It almost sounds like a musical rather than an opera. The trio’s attempt to move on stage is quite cute and funny. They seem on the verge of breaking into a tap dance but obviously don’t know how to! After all, this is still an opera!

However, Trouble in Tahiti’s tragedy lies in the contrast between this perfect suburban life described by the trio and the real matrimonial life of Dinah and Sam who can’t even have coffee without getting angry at each other. Framing fraught scenes of Dinah and Sam as they struggle to get along whilst going about their everyday lives, the trio brought energy and exuberance to the stage, creating different levels of performance through the overt fiction they are ‘selling’. The final scene is haunting; alone, each of the characters divulges their anxieties about their relationship to the audience. Together, they cannot communicate, except to seek resolution in the consumption of popular culture as they plan a cinema trip. They finally find refuge in the consumerism of American culture, at a sacrifice of their ultimate happiness.

The modernity of Bernstein’s music was an important discovery for me! Without any transitions, he jumps from one genre to another, voices echoing other voices, which made the whole performance really dynamic. I’ve been re-listening to some of the scenes multiple times this past week! Special mention to the trio who really made me happy!