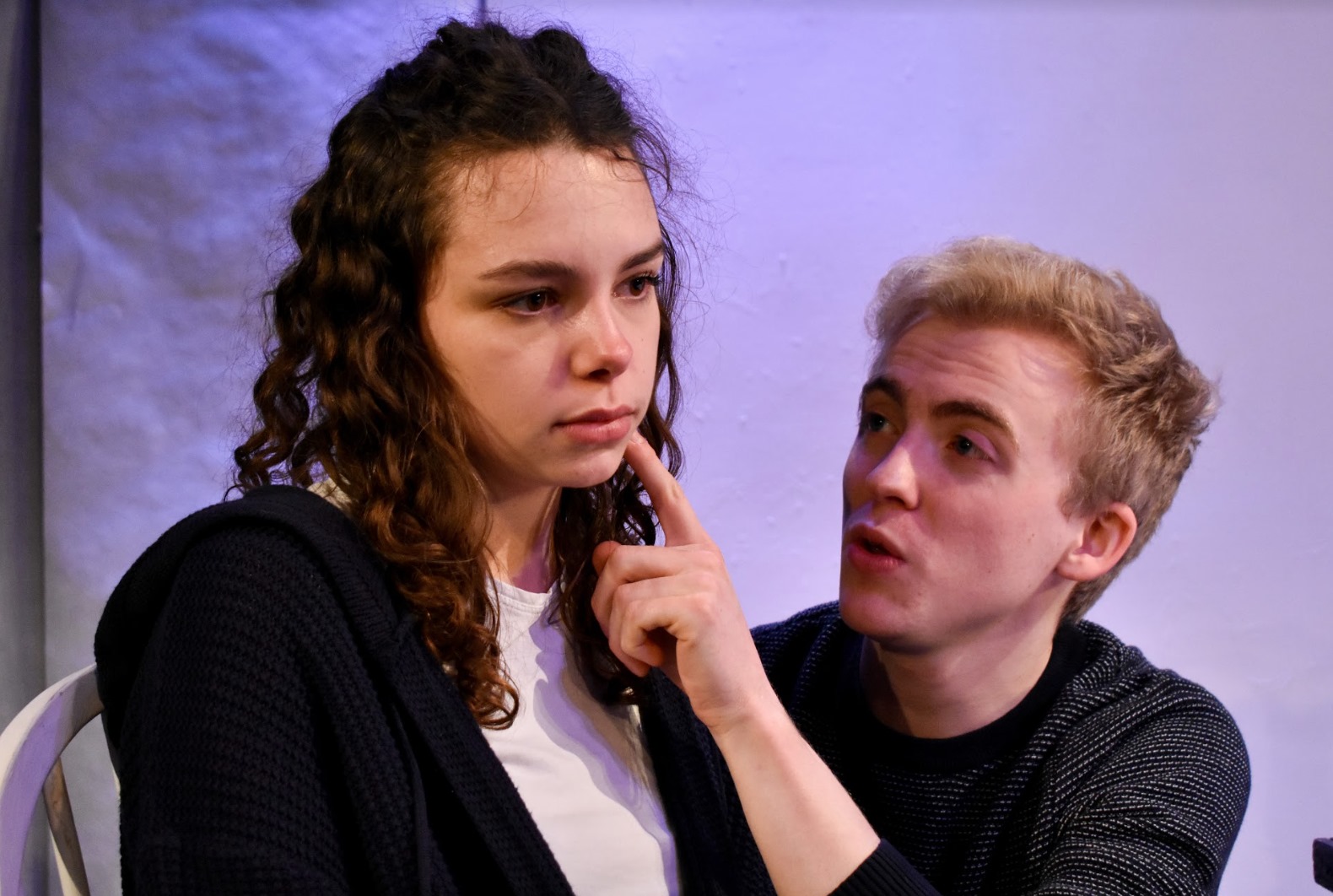 ‘The phone keeps screaming and the birds keep ringing.’ Something was really wrong in the Drama Barn last night.

DramaSoc’s week-end show Little Light, written by Alice Birch and directed by Lucia Rimini, reunited two sisters, Alison and Clarissa, and their respective partners, Teddy and Simon, for an annual family lunch. However, from the beginning the atmosphere is far from relaxed.

As all the spectators sit in the barn, we see Teddy (James Chetwood), Alison’s husband, running around, sweeping the floor, making sure everything is neat and tidy. The play starts, Alison (Kezia Herzog) comes in, a stream of wet brown curls running down her neck, a high-pitched yet rather loud voice, and a very aggressive tone from the moment she opens her mouth. The tension between the two of them is already really strong. Nothing Teddy has done is right for Alison. Her exasperation full of pain confronts Teddy’s helpless efforts. Enters Alison’s sister, Clarissa (Ella McKeown). She has sweet blond hair tied up in a bun and a light voice. She is desperate to appease the situation. She wants a ceasefire but only gets silence or a punchline from her sister. So the tension tightens.

Teddy runs around, nervously setting the table. A phone rings. Alison loses it. No communication allowed in this house. The spectator is worried as Alison forbids all possible progress. Alison’s constantly aggressive tone and obvious suffering are unbearable. Simon (Logan Jones) arrives, unexpected. He has never met Alison and Teddy before. He is warm and sweet. He has a smiling round face and red hair. He seems very sane and clearly does not know about Alison, Clarissa, and Teddy’s history. So the tension tightens a bit more. We can’t keep going like that, either the play or the spectators will crash.

Little Light is incredibly frustrating. We have paid a ticket so see people tell us a story and therefore communicate with each other, but we are faced with characters that seem to be full of rancour. What is their history? What happened? Why is there so much hate between the two sisters? Why does Teddy look like he’s on the verge of a nervous break-down? The enigma around the occasion of the gathering holds us hanging on the edge of our seat and is the most intelligent element of the play.

The tension is almost at its maximum and keeps escalating. It keeps building up and up and up until it reaches a climax. Just as you realize you can’t take much more of Alison’s aggressiveness or Teddy’s silent distress, the play takes a comic turn. All of a sudden, from being frankly painful, the play becomes quite funny, and this is due to a running rhythm and the temporality is treated.

We learn very quickly that this lunch happens every year. From year to year everything needs to be exactly the same. Alison is obsessed with keeping things as they were. Teddy and Clarissa understand that. ‘There’s been a mix-up with the lamb’ ‘we always drink the same wine’, they keep repeating. On the one hand, it’s quite comic to see them stuck in the imitation of the past, on the other, their obsession with it is quite disturbing. Why do they want to keep the things the same? Same as what?

Another really clever element of the play is the character of Simon. Just like us, he doesn’t know the history of this family and is quite confused and shocked. However, what’s so good about Logan Jones’s acting is that he doesn’t over-do it by losing it. He stays polite and supportive of Clarissa.

The scenery was well thought through too, as Lucia Rimini opted for a very realistic aesthetic. I always find realistic props reassuring, both for the actors and the spectators. Perhaps the fact that they had real food and drinks, and the good repartition of sofas and chairs on the set enabled all actors to have natural and fluid movements rather than being static.

Little Light is an audacious play! It starts very strongly and has little room to keep going in a crescendo, but somehow forces its tone until reaching a climax which is then used to take the performance one step further.