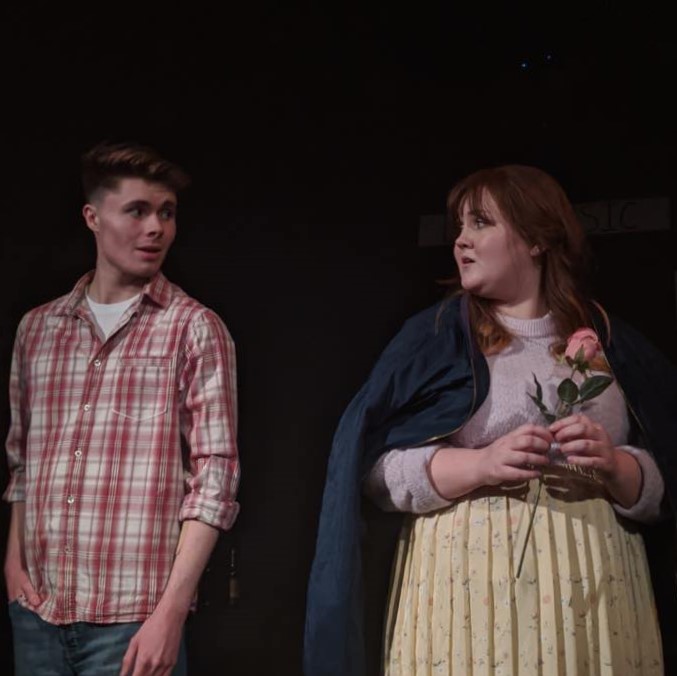 I hate musicals. I’d like to think most rational people do. Yet, CHMS’ Dogfight is, without a doubt, one of the best student productions I’ve seen in my time at university. I feel like the stereotypically annoying performing arts student that constantly hums the lyrics to the songs I performed a week ago – but instead, I find myself humming the tunes of Dogfight. This is a production that has been masterfully crafted by a wholly passionate crew.

In 1960s America, we follow the story of Birdlace (Adam Lambe), a staff officer of the U.S Marines set to enter the fray of Vietnam – but on his final night on home soil in San Francisco, he and his squaddies entertain the old tradition of the Marines, a DOGFIGHT, where the man who brings home the ugliest girl wins. What ensues is a heart-aching romance between Birdlace and Rose (Jess Field), with Birdlace inevitably shipping off to war. This is all at the backdrop of Birdlace’s closest squaddies, Bernstein (Owen Butcher) and Boland (Will Harvey), who continue the course of drunken debauchery, tattoos, and rowdiness. Yet, the violence of war is inescapable. When Birdlace returns to San Francisco, he is a broken man, with only one place left to turn to.

Dogfight carries a lot of themes in its writing. Based on the original musical by Peter Duchan (music provided by Benj Pasek and Justin Paul), CHMS’ iteration of this material remains authentic and true to purpose. Every moment, big or small, is characterised by mellifluous and harmonious music conducted expertly by Jack Askew and the band of: Richie Haynes (guitarist), Liv Muir Wilson (bass guitar), Robert Hucknall (drums), Naomi Prince (cello), Jason Lai (violin), and Patrick Mark O’Connell (keyboard percussion).

However, this production would’ve been nothing without the production team. Director Anna Gallon’s vision has truly come to life. It is clear that budgetary restraints limited the prospects for costume designer Abena Abban, but there was still a convincing effort made which maintained my immersion (although to the keen eyed nerds, it would’ve been nice to see some correct weaponry used by the Marines). Ellen Waters and George Lawrence as set designers did a beautiful job of immersing the audience in a wide array of scenery, the best of which being the touching moment at the Golden Gate Bridge. However, the show was stolen by the use of effects and lighting by sound and lighting designer James Bithell, his work  converging in an intoxicating rendition of Vietnam’s horrors, where explosions blast through a nerve-wracked audience.

While in some cases rookie, wooden acting gets in the way of delivery – it was vastly improved by the captivating performances of Bernstein, Marcy (Alicia Hartley) and Ruth Two Bears (Molly Moran). However, the background cast do much to add to the electric and harmonious atmosphere as we follow Birdlace’s journey. I noticed a couple of people crying in the audience from the powerful deliveries of Rose and Birdlace, who stole the show with relatability and charm. Glossy eyes shone and angelic voices sung a story of beautiful pain.

Overall, this has given me a promising look into CHMS’ future shows. If they show the same talent, passion, and ability to execute an amazing production, I am certain their members will elevate the society into providing some of the best productions on campus.