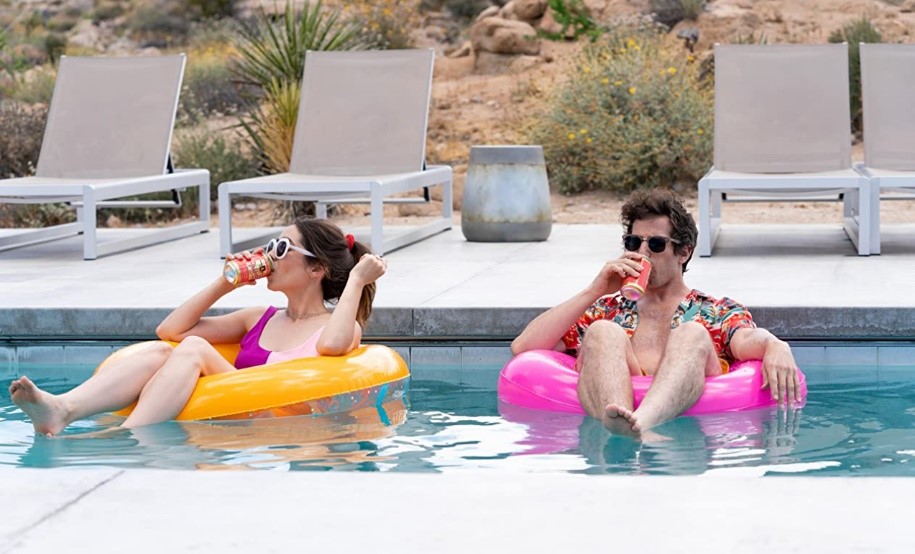 The success of Groundhog Day (1993) was built on the originality of its central concept- a romantic comedy with a twist. The twist being it centres upon a man stuck in a day on repeat. Also seen in Edge of Tomorrow (2014) which added a similar special twist. And, later in Happy Death Day (2017) which was given similar time-bending treatment – or even its sequel Happy Death Day 2 U (2019) which danced around the irony of being a repetitive sequel of its fun original concept – a film on repeat if you will.

Palm Springs has a more difficult task on its hands as it approaches the same day-on-repeat concept within the familiar rom-com setting. However, this one feels fresher and more fun than other entries into what is building to be its own sub-genre. The conventionality of this entry stems from the plot which places two wedding guests, Nyles (Andy Samberg) and Sarah (Cristin Milioti) in a time-loop together. In the movie world, this is the perfect place for a cutesy romance to blossom. It isn’t much of a spoiler to reveal that a romance does indeed develop.

Pitching this plot may have taken some convincing, as it doesn’t sound like the most original take on the time-loop genre. Remarkably, Andy Siara’s screenplay gets its kicks from just how original it feels. Varying sub-plots and set-pieces, such as Roy (J.K. Simmons) hunting down Andy Samberg’s character and attempting to kill him in the most creative ways imaginable, add a new dimension to the already multi-dimensional tale.

Due to pandemic delays, this feature had brief screen time in the states. It began to build a buzz around its feel-good fuzz, which perhaps has made its unique charm less of a surprise than it may have been otherwise. Still, this isn’t the films’ fault – and although endangered by its own over-hype – it mostly manages to live up to the excessive build-up. Following a nomination for Best Musical/Comedy at the Golden Globes, this high-concept fantasy film directed by Max Barbakow has also won over UK audiences with ease.

Anchoring the films upbeat appeal are the central time-loop companions. Andy Samberg continues his run as a reliably funny frontman. His sharp comedic ability sourced in Brooklyn Nine-Nine (2013-2022) or Popstar: Never Stop Stopping (2016) is on show in the sunny springs in abundance. But what sets this apart from his previous entries is the endearing charm and sentiment which accompanies the high concept.

Alongside Samberg, the real star of the show is Cristin Milioti, an actress who has often been overshadowed by bigger names or more interesting characters. She is pushed off the screen in the marital and metaphorical sense by Margot Robbie in The Wolf of Wall Street (2013) and is probably one of the less memorable members of the How I Met Your Mother (2005-2013) cast. In Palm Springs, Milioti grounds the absurdity in a performance certain to push her presence comedically and dramatically for future casting.

Last year, Tenet (2020) blasted its noise through cinema speakers in the brief period they were open. It seems that Palm Springs is offering a polite lesson in the proper way to play with time on-screen. Despite the up itself intricacy of Nolan’s time-warped bore, it is this rom-coms ‘charm amongst the palms’ which shines above. In the company of Samberg and Milioti we get a surprisingly profound picture, which provides interesting and often existential themes.

However, wrapped in a charming love story, there is more Capra than Camus to the film’s screwball wit. It is admirable to watch a seemingly light-hearted screenplay embrace its unavoidably ‘deep’ concept. The film doesn’t shy away from pausing for thought and putting the silliness on the back burner – within the high jinks’ hilarity of the central duo’s relationship are discussions of the morals of sex within a loop. Of course, with Samberg in tow, we are never far from the screwy set-pieces and outlandish one-liners which he revels in.

While the sentiment of a day-on-repeat movie isn’t hard to find following a year plagued by lockdowns– Palm Springs is a real winner because it never fails to raise a smile. While it may have developed a somewhat over-the-top status as the must-see film of the year – there is no denying the feel-good charm that it packs. Opening with a steady course of conventionality, the screenplay quickly veers off in a unique and unexpected direction, making it an exciting day-on-repeat ride that you’ll want to watch again, again, and again.