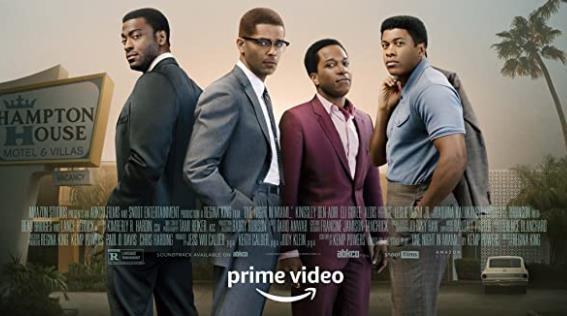 (Image: 'One Night in Miami', courtesy of IMDB)

“There’s no room for anyone to be standing on the fence anymore”, preaches Kingsley Ben-Adir as Malcom X, perhaps the greatest strength of Regina King’s new film One Night in Miami.

On 25 February 1964, Cassius Clay was crowned World Heavyweight Champion (WHC). Standing on the shoulders of giants, Clay was already carving his legacy at 22 and beginning to understand his responsibility as a prominent figure during a crucial time in America. One Night in Miami hones in on the roles that Cassius and his A-Team of 60s civil rights era black power personalities possessed.

Based on the play written by Kemp Powers, who also penned the screenplay for this recreation on screen, One Night in Miami captures the momentous night in which Malcom X (Kingsley Ben-Adir), Jim Brown (Aldis Hodge), Sam Cooke (Leslie Odom Jr.), and Cassius Clay (Eli Goree) convened in a hotel room to discuss their roles in the American civil rights movement of the 1960s.

Following a similar path to Fences (2016), or more recently Ma Rainey’s Black Bottom (2020), the screenplay remains relatively loyal to its on-stage predecessor. A slightly unsteady opening and a powerfully poignant denouement deviate from the source material, providing a more expansive story and justifying a film adaptation.

Still, the film is it at its strongest when drawing from its theatrical roots, focusing on the hotel room conversations and allowing the dynamic dialogue between the larger-than-life characters to flow with naturalistic chemistry and passionate force. These scenes are orchestrated by Malcolm X, who insists that his friends should put partying to one side to discuss their position, and the influence they hold. A conflict of contributions arises in the room which becomes a boiling pot of enigmatic energy, to which all of the cast greatly contributed.

Between Sam Cooke and Malcolm X, conflicting attitudes blend in a cocktail of frustration. Cooke is criticised for not contributing to the cause, while Malcolm X is called out for hypocrisies within his own ideals. Mediating between them, Cassius Clay broadcasts that “power just means a world where we’re safe to be ourselves”. Each perspective is conveyed excellently, with rising star Kingsley Ben-Adir’s portrayal a particular standout.

Kemp Powers’ sharp screenplay navigates the various voices carefully, allowing equal opportunity to do justice to what is only an imagination of what may have gone down that night. Often, the screenplay can get tied up in its stage play seat, with occasional scenes providing no benefit from being transferred to the big screen (or our TV screens for now). But Regina King’s consistent direction gives the small setting a feeling of space, allowing the larger-than-life characters to break from the limited properties of the setting and navigate such compelling conversations.

Exploding out of the smaller setting are the leading and highly theatrical characterisations which benefit the imaginative nature of the dialogue. Of course, the four did meet, but a lot of the events and conflicts within the movie seem to be part of a creative process, which is treading a careful line between character exploration and exploitation.

Johnny Flynn was criticised for his interpretation of David Bowie in Stardust (2020). Contrasting to this, King and Powers have demonstrated that the fine line between entertainment and exploitation can be steadily walked, and even with flare and great discernment.

One Night in Miami carefully balances the creative licence of a glance into an undocumented evening in history, and the necessity to accurately portray such iconic figures of history. Both timely and fascinating, Powers and King live up to their names and deliver an enchanting piece of what could be regarded as ‘concept history’.