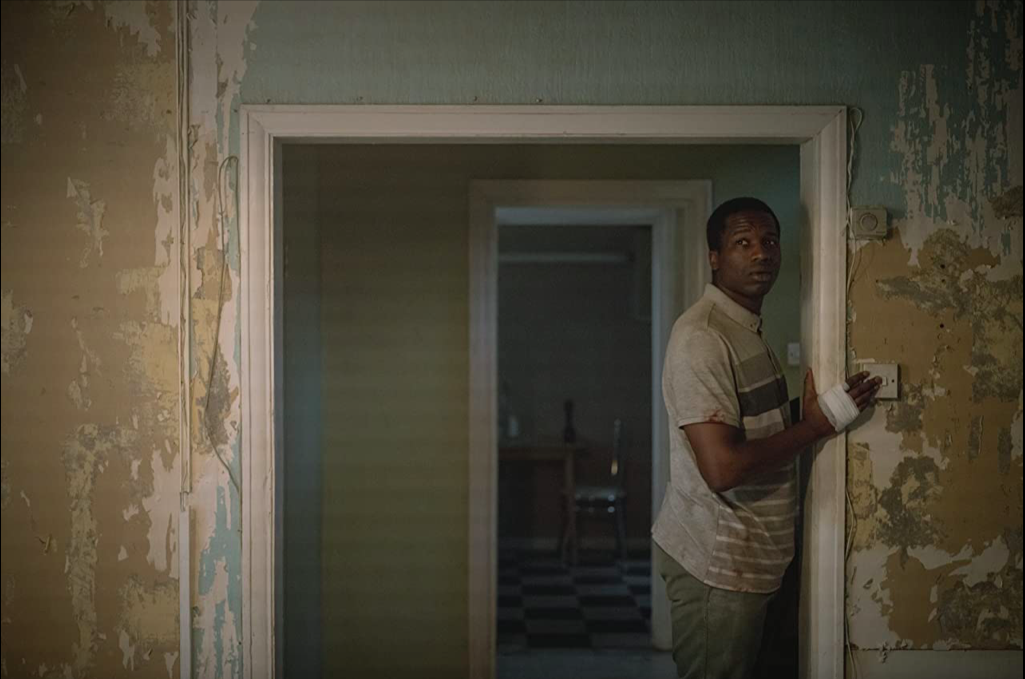 Remi Weekes’ directorial debut His House captures the isolated experience of a refugee couple, haunted by their war-torn past. The evil lurking in this twist on the classic haunted house tale is a manifestation of their own experience and tumult of trauma.

The film follows characters Rial (Wunmi Mosaku) and Bol (Sope Dirisu) from their escape of South Sudan, to their attempts at adjusting to British life in London. Mosaku and Dirisu aid the potent power of the film with their grounded, and emotive performances. Beautifully portrayed,  both characters are running from a past of lost children, friendship, and culture; the film is at the height of its powers when focusing on the perils of this couple’s experience.

Combined with the dramatic narrative is a modern take on the haunted house story. The run-down council house given to the couple is the site of their supernatural story, in which the ghosts of their past begin to emerge. Under strict supervision, the detention centre supervisors made clear that the characters were “asylum seekers, not citizens”, who “must report to us weekly”. Before any stereotypical supernatural horror has commenced, they are subject to mistreatment. Countering these demands is the evocative expression of heartbreaking joy the couple express to even be permitted this opportunity. The film succeeds in getting under the skin of the viewer, something which is taken very literally in the film’s gory climax. It is the alienation of our protagonists that creates this atmosphere. Despite being given a home,  Weekes makes it clear that the couple still feel watched and imprisoned. Rial and Bol are simply unable to connect to their environment – the ghosts of their past are a barrier to their future.

Sceptical security guards, caucasian clothing models in shops, and the metallic taste of knives and forks convey the isolation and lack of belonging. But the screenplay, written by Felicity Evans, Toby Venables, and Remi Weekes, strikes a balance with the odd moment of empathy from outsiders. The treatment and conditions the couple are forced to endure is a horror story of its own. Combining the realism of the refugee experience with a haunted house horror is an interesting way to intensify this message. For the most part, the film is an effective integration of horror and drama. Demonic intruders were entirely associated with the couples’ haunted past, and act as an extended allegory for their experience. However, it does appear that moments of heightened emotion entirely stem from reliving the couple’s past, rather than their supernatural present. Moments of horror seem to linger too closely to the haunted house routine. Very obvious set-pieces of cliched haunted house genres come and go in occasionally tired fashion.

His House does excel however, in revisiting the horrors of  war-torn South Sudan. Enticing the viewer’s attention through its heart and emotion, rather than its ghosts and apparitions. However, this is perhaps what was needed from a modern adaptation of the horror genre. Similar to the heartful intensity of The Babadook, it is the characters’ experience that keeps  us invested, rather than the jumpscares or gore. His House captures the same visceral quality as the BBC drama Sitting in Limbo, which treaded similar water when dramatising the Windrush scandal. This, combined with the unnerving intimacy captured in horror favourites such as Repulsion or even The Conjuring, ensures that Weekes’ directorial debut is one to be remembered.

Surrealistic set design, framed concisely by Jo Willems, combined the outlandish power of horror, and the dramatic nature of the couple’s story perfectly. However, in other areas the attempts to scare don’t quite land as successfully. The ghosts, or hallucinations that target the protagonist often lack creativity in their creation and are guilty of being repetitive. The same can be said of the film’s concluding creepy figure. Designed similarly to Carel Struycken’s ‘Moonlight Man’ in Gerald’s Game, his presence in the film’s climax felt a little tired. What is clear about His House is the dominance of realistic and all too relatable fear in horror. Whether it’s desensitisation (I blame the internet) or simply lack of creativity, the ghosts of a haunted house aren’t particularly effective at inducing strong fear anymore. However, as many modern attempts at horror have displayed, when combined with a strong dramatic narrative it can work.

In July, immigration minister Chris Philip commented that the number of boat crossings was “unacceptably high”. British media, both intentionally and unintentionally, is making the picture clear that the “crisis” isn’t to be blamed on the people entering this country, it lies in the way they are welcomed. Enforcing this precept with tenor is the primary reason the film deserves the plaudits it certainly will receive. His House effectively packages horror, drama, and politically vital statements in its roughly 90-minute runtime. Where it fails in its attempts at conventional haunted house horror, it succeeds in creating fear through the intense experiences of the helpless refugee.