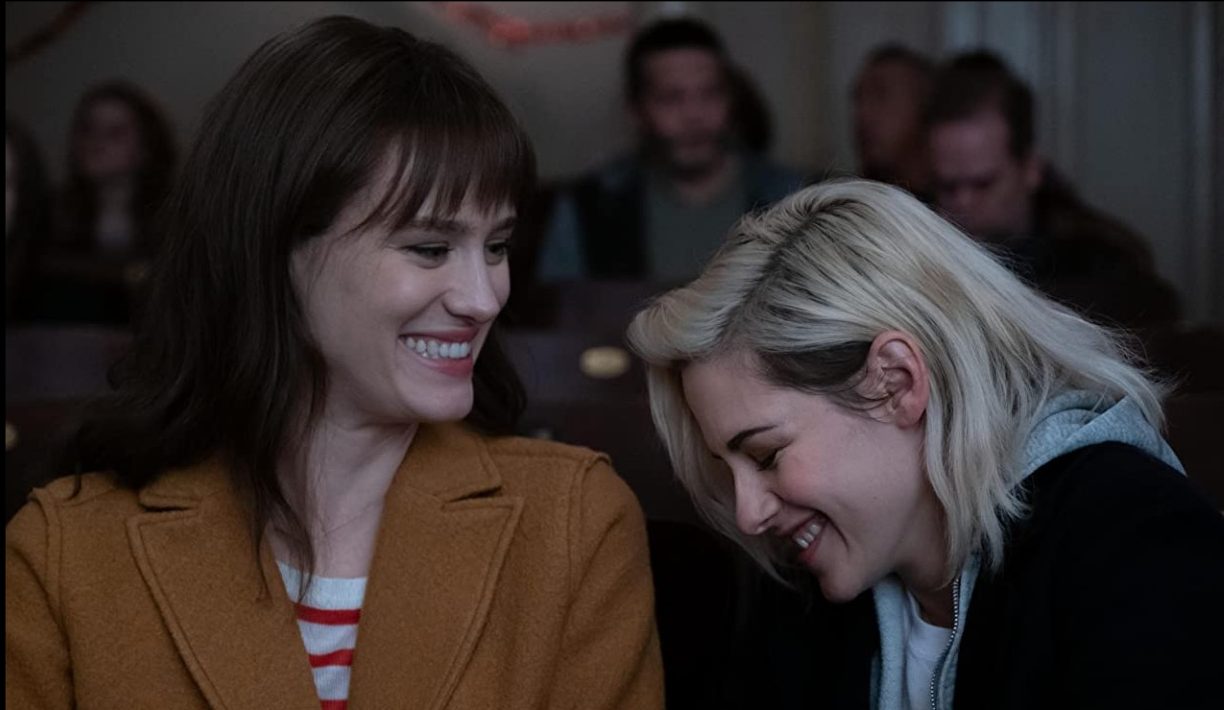 Despite being only recently released, Happiest Season has already cemented its place within the canon of Christmas and queer classics.

The film follows the very-much-in-love Abby (Kristen Stewart) and Harper (Mackenzie Davis) as they navigate their first Christmas as a couple, with all the hilarity and heart of any of any other romantic comedy.

The catch? Harper is yet to tell her middle-of-the-road, conservative parents that she’s gay. They face a week with her family pretending to be roommates – at one point Abby is dolefully introduced as “Harper’s orphan friend!”

As the perfect family Christmas falls apart around them, the arguments get heated, baubles get thrown and their relationship is tested to the limit. Cue the festive fun!

I’ve been a fan of this film’s writer and director, Clea DuVall, for years, so I was always going to love this film, but I didn’t expect to love it this much. It was as though someone took all my favourite parts of every other Christmas movie and a bunch of really great actors and put them together into one big queer collaboration, wrapped it in tinsel and said HERE.

It was equal parts ridiculous, funny, honest and heartbreaking, and every bit as cheesy as you’d expect.

As a fuzzy Christmas rom-com, there was the added comfort of knowing everything was going to turn out okay in the end, which was a much appreciated reassurance in the more chaotic scenes, which are abundant in a film like this.

For those, you can look to Tipper (Mary Steenburgen), Harper’s overbearing and image-obsessed mother, and her sister Sloane (Alison Brie), intent on becoming the favourite sibling no matter the consequences.

Co-writer Mary Holland plays the ever-ignored middle sister Jane, who so earnestly tries to earn her family’s love and respect whilst they are reluctant to give her any, and is the best tonic to the chaos of her family and the film.

Throw in Harper’s ex-girlfriend, ex-boyfriend, father running for public office, some big misunderstandings and a very big secret, and DuVall has written a recipe for disaster. While things continue to spiral for Abby, her best friend John (Dan Levy) provides some much-needed comic relief in the form of a hapless pet-sitter, a perfect contrast to the emotional rollercoaster that is Christmas at the Caldwell family home. Hilarity ensues.

There are scenes in the film where certain characters take away any faith you have in human decency and morality; those are harder to stomach. But then there are heartfelt moments and reassuring displays of humanity that counter any of that bitterness.

Rarely does anyone have a ‘perfect’ Christmas, and Happiest Season doesn’t shy away from this; it balances all the silliness, anxiety, heartbreak and love so wonderfully that it’s only appropriate to call it a resolute success.

This is (somewhat unbelievably) the first festive romantic comedy with a gay couple at the centre that’s been backed by a major studio, and it leads the way for (hopefully) many more happy endings to come.

It felt purposeful; it was written by and about people like me for everyone to appreciate and enjoy and bask in the glow of.

It definitely holds its own against the festive rom-com titans of Love Actually, The Family Stone and The Holiday.

While twitter is awash with praise and criticism and everything in between, I’m more than content in saying it was wonderful, hilarious, and certainly an instant Christmas classic.