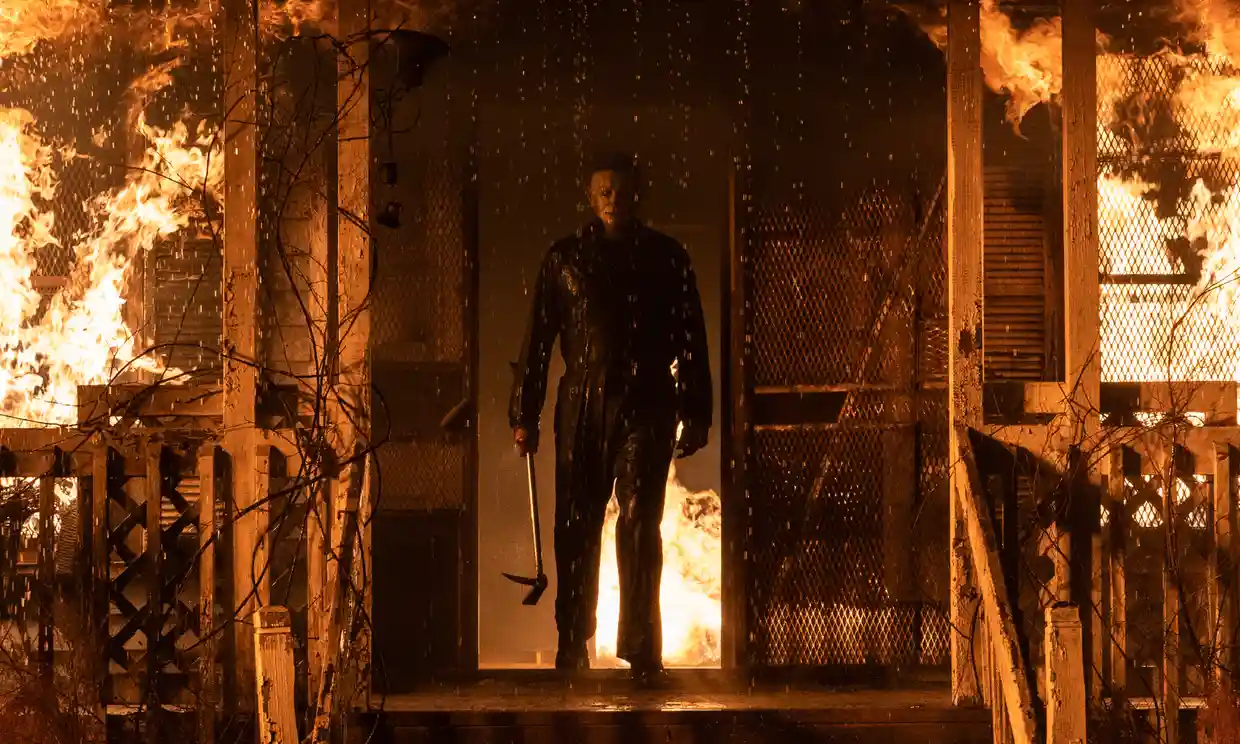 All horror franchises produce enough sequels of declining quality to the point where the franchise ends up just as dead as the killer’s victims.

The Halloween franchise had reached this point – multiple times – with its many disappointing sequels and remakes, until in 2018 director David Gordon Green created a Halloween sequel that disregarded all other sequels and finally found a good platform for the series to launch off from, setting the Boogeyman up for good and frightening things.

After a yearlong delay due to the pandemic, we finally have Halloween Kills, the middle part of a sequel trilogy that is set to end with Halloween Ends next October; but does Kills fall into the category of the many bad horror sequels or the few good ones? Thankfully it fits into the latter, although that doesn’t mean it’s a perfect film. Whilst there’s lots to praise about the new sequel, there is also a lot that went wrong and doesn’t hit the mark.

The film kicks off right where the last one ended with Michael Myers being left to die, trapped in Laurie’s home whilst she goes off to hospital with her family to recover. But of course he doesn’t die, and this kicks off his latest killing spree through the town of Haddonfield.

Unlike with John Carpenter’s 1978 original, Halloween Kills takes its time with the setup, and whilst we do get some exciting and brutal kills, it’s a good forty minutes until the film really clicks into gear and starts to move into its own. The town of Haddonfield start to come together to track down Michael Myers so they can kill him for good. The film sees the return of familiar names and faces that fans of the original will immediately recognize, including a now grown-up Tommy Doyle, the 8 year-old boy that Jamie Lee Curtis’ Laurie Strode babysat for in the original film.

This makes Kills truly feel like a Halloween film with plenty to tie it into the world of the original film, not least the returning characters, but also through flashbacks to Halloween night of 1978. Myers’ presence mixed with Carpenter’s wonderful score is a sight to behold and as chill-inducing as ever. Despite having a slightly smaller role, Laurie Strode and her connection with Michael is still central to the film, but the film makes the wise decision in realising she doesn’t always need to be front and centre. Other characters are allowed to take centre stage, keeping Halloween Kills fresh and original and not too derivative of any of the other Halloween sequels.

However, Halloween Kills is largely weighed down by the writing and the age-old horror movie trope of no character acting like any sane individual would do. Kills includes characters splitting up, deciding to go and face the psychopathic murderer alone, and leaving the door unlocked amongst, all your favourite horror movie character motivations that make little sense. To match the silly character decisions, some of the dialogue comes across as a little cheesy and almost as if it’s there just to be used in the trailer.

But the film does make some interesting and bold choices in its portrayal of mob mentality as it decides to explore the town’s rage and angst surrounding Michael Myers and his return. There’s one particularly riveting scene in the hospital in which we witness the town doing everything they can to track down and kill the Boogeyman. Nevertheless, this mob chanting “Evil dies tonight!” (which was also the film’s tagline) never quite hits the mark it’s supposed to when you know that evil won’t be dying just yet, at least not until the sequel next year.

Being the middle film in a trilogy is always a tricky job as it has to build upon the themes and characters of the first film, which Kills does very well. The returning characters are brought in well and feel integral to the film’s plot and relevant to our return to Haddonfield, adding a greater sense of scale and threat to the film without taking away from Laurie and her family. The film leads up to an impressively tense and thrilling finale, but it feels slightly lessened by the upcoming sequel and knowing that we won’t truly get a full conclusion until next Halloween.

As usual, Michael Myers fills you with terror every time he’s on screen and his presence feels threatening, but rather than filling you with suspense and having you on the edge of your seat like Carpenter does in the original film, as the title suggest, Kills feels like it’s deriving all of its scares from the murders themselves. There are some gory kills in the film and it ups the body count from some of the other Halloween sequels but there were times when the film was opting for cheaper thrills and scares in the form of grisly murders rather than getting the tension of watching Michael stalk his victims and filling us with dread.

Halloween Kills has its flaws and is let down by its writing but there are enough kills for slasher fans to be entertained. It ties back to the 2018 sequel as well as the original Halloween well whilst expanding on the film’s lore, providing fans of the franchise with a good time at the cinema and setting the franchise up for what promises to be a terrifying conclusion in Halloween Ends next year.

Halloween Kills is in cinemas now.