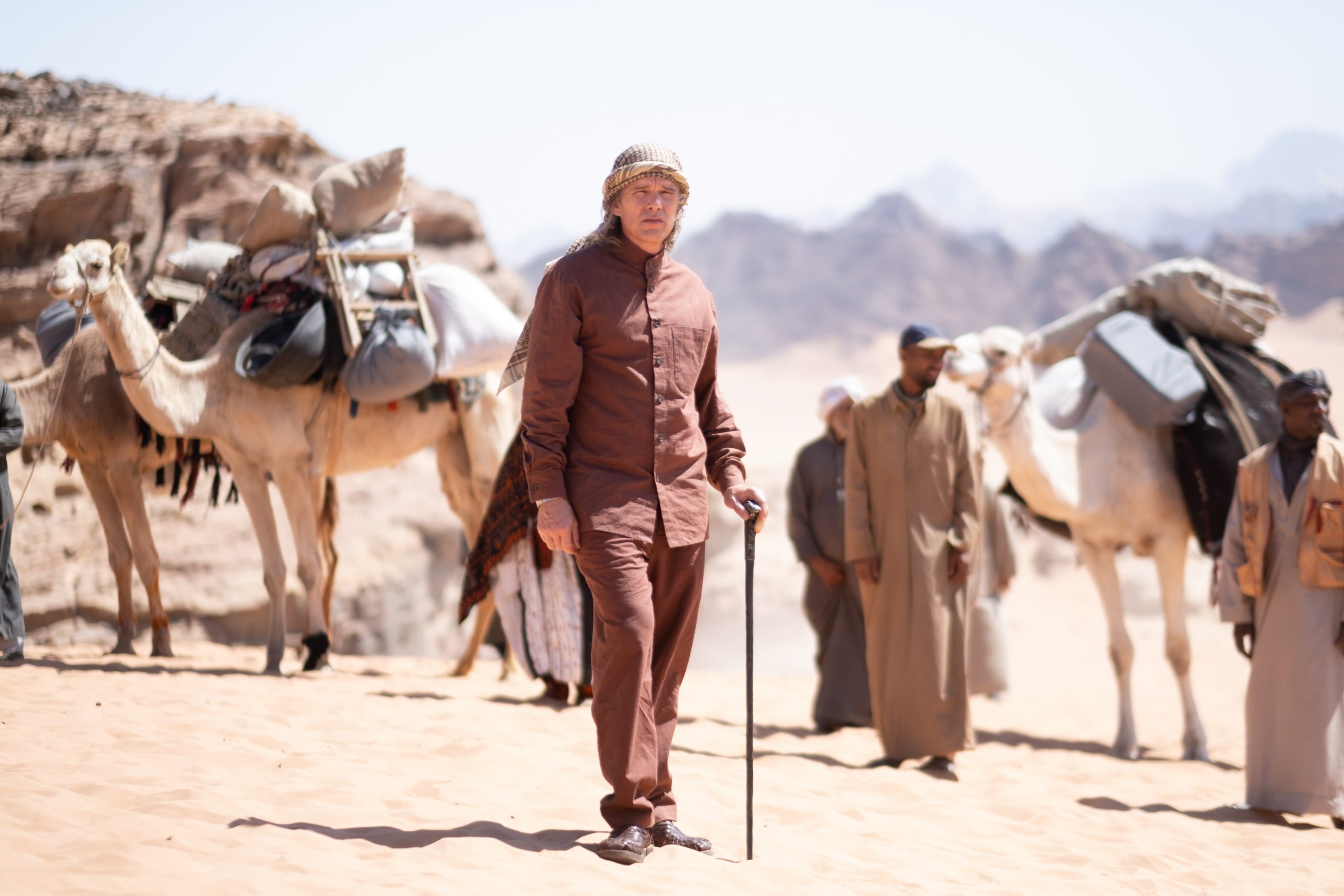 And we’re back for another episode of Moon Knight – packed with adventure, spy crusades, sparkling visuals and a blend of thoughtful and humorous writing – this series really is the Marvel-ous gift that keeps on giving. This week Marc learns an important lesson about teamwork; and how, despite his attempts to lock Steven away, sometimes Egyptian adventures require the knowledge of our resident mythology nerd.

Finally gaining a full perspective for Oscar Isaac’s second character, the episode explores what makes the mercenary Marc tick. We see his action star skill set up close, learn that he is still hiding a huge history from Layla, does hold a surprisingly vulnerable side and when it comes down to it, can and will give up control for the good of the fight.

Layla also dominates this episode, joining Marc in his Egypt escapades and using her black market contacts, knowledge, fighting prowess and unique blend of logic and heart to contribute significantly to this new team. Is she the friendly type the title refers to? Or is this sarcasm referring to the more vulnerable personas of our anti-heroes, such as Marc or Konshu? A play of satire towards the more antagonistic Harrow? Is everyone or no-one the friendly type? Or is it this the first hint towards a previously hidden entity?

This week’s episode chooses to wake up with a blurry shot of Layla, the first time we’ve experienced a perspective away from Marc or Steven. Anxious that Marc is “probably going to get himself killed running around Cairo”, Layla is forging a passport and discussing her past history as an antiquities ‘Robin Hood’ with a family friend. We learn that Layla is smart, cunning, channels her passion into righting the stolen wrongs of the past (similar to another Wakandan museum robber we know), she isn’t exactly welcome in her Egyptian homeland, and that her late father called her scarab (an interesting connection to our main macguffin). But more on this badass archaeologist later!

True to Layla’s prediction, Marc is running across rooftops, chasing bad guys and generally avoiding getting killed in Cairo. Our first look at the action skills of Marc (and the stunt abilities of Oscar Isaac – seriously I barely saw a stunt double), is very ‘Jason Bourne’ – a global setting, fast rooftops shots, foreign henchmen, and yes a bit of amnesia thrown in there. Oscar Isaac’s ‘Poe’ level snark finally surfaces here in a fun blend of comedy amidst intense action.

And boy, is this fight scene intense; complete with ‘Winter Soldier’ level knife flips, rhythmic punches in time with the music and of course the return of the mid-fight black out – this time from Marc’s POV as Steven struggles to stop the violence.

While Marc always returns to continue the mission for information, there is one strange moment when he wakes to find that his body is midway through stabbing someone – a fantastic editing choice but not really an act pacifist Steven would approve of … who killed these goons if it wasn’t Marc or Steven? Is there another more vicious identity hiding within this reluctant team?

Failing to gain the location of Ammit’s tomb, Konshu moves the moon to create an eclipse and summon a meeting of the godly Ennead (in a gorgeously designed Pyramid of Giza setpiece), where the ancient gods speak through their human avatars. This is a wonderful chance to explore the inner workings of the Egyptian gods’ earthly purposes, the more neutral roles of the other avatars and their decisions to “not meddle in the affairs of man” (we are certainly building a repertoire of ancient beings taking THIS oath in the MCU).

Konshu’s dramatic voice speaking through a physically disturbed Marc is very striking, and Harrow’s calm and seemingly concerned unveiling of Marc’s conditions adds a real vulnerable note to the scene. Marc kneeling under the power of the gods, honestly describing his struggles and pleading for help is something I did not expect from him after his aggression towards Steven, and another great look at the despair and hardship this person is struggling through.

However, Harrow won’t slow his pursuits and neither can Marc. Jumping straight back into the race to Ammit’s Tomb, Marc receives a hint to find Senfu’s sarcophagus, and Layla arrives in Cairo with the black market knowledge and Madriporian connections to assist.

After a emotive boat ride where the husband and wife seem to reconcile over Marc’s disappearance and their difficult love for one other, we arrive at the party-rific home of Anton Mogart (played by the late Gaspard Ulliel), a rich ‘philanthropist’ whose hobbies include jousting and ‘preserving’ historic artifacts.

Refusing to let Steven out, Marc convinces his built in Egyptian master to help decipher the sarcophagus, an exchange that doesn’t go unnoticed by their suspicious host. Guns are drawn, Harrow arrives to blow up the sarcophagus and a Moon Knight fight begins.

Cutting between Layla’s one-on-one tumble with Anton’s bodyguard in her attempt to secure the now tattered star chart, and Marc’s one-on-many take-down of Harrow’s goons, the editing, stunt performers and action of this scene is epic. The Moon Knight suit is the star here, as we follow the crescent moon weapons stabbing everyone, slo-mo kick flips from Marc and a crescent moon cape billowing behind.

Steven’s attempt to take over midfight, suggesting everyone just “chill the f down” provides a light comedic break but leads to a Steven Shish Kebab, with his Mr Knight suit stabbed by multiple jousting swords and Steven throwing power back to Marc. Held stabbed into the ground by goons we get an insight into the suit’s healing powers – this man really should be dead – and yet still has the energy, strength and well, aliveness, to snap the swords, stab his captors, and race across the field to save Layla before she gets crushed by Anton’s horse (in an intense, down-to-the-wire wide shot).

A successful fight but a not so successful relationship status. Harrow had revealed to Layla that Marc may not be telling her the whole truth about their past (a past we still know very little about), and Layla admits…”every time I learn something new about you I think that’s it, there can’t possibly be any more secrets” – I mean I feel the same way about the endless mysteries of this show- to which Marc coldly responds “you don’t (know me at all)”.

A now significantly more tense team attempts to decipher the star map, but ultimately needs its resident mythology nerd Steven Grant. Marc hands over control in one of the kindest transfers thus far – a bell chimes, and Oscar Isaac’s face gracefully morphs from defeated Marc to soft Steven with a quiet “Cheers, thanks a lot”.

Map deciphered, Steven needs to know the positions of the stars on the ancient night Senfu recorded the tomb location – and thus we’re gifted with a glorious scene of Konshu literally spinning the Earth sky back in time. Steven’s Mr. Knight assists, and the visual effects of light streaming past, stars floating out and a glorious display of cosmic power is magic to watch.

Warned by his fellow gods not to mess with Earth skies, Konshu must face the consequences and is now trapped in a statue (i.e. no more healing Moon Knight suit), Steven is unconscious and the universe may or may not be 2000 years younger? But there are some perks. Layla does have the exact location of the tomb, and Harrow gets a chilling villain monologue towards the entrapped Konshu statue – with brilliant acting here from Ethan Hawke in his delivery of anger, resentment, satisfaction and victory, all directed towards a prop.

And the credits roll with a new fascinating mix of iconography, the next phase of the moon, and accurate Cairo skylines. Specifically look out for the three faces of Oscar Isaac that emerge; there definitely seems to be more to his Dissociative Identity Disorder than meets the (constantly blacking out) eye.

We watched a team develop over this episode, composed of Marc, Layla, Steven and a surprisingly helpful and less terrifying Konshu this week. This team was intriguing to watch, as they learn to work together and evolved into specific roles – the brains (Steven), the brawn (Marc), the heart (Layla) and the power (Konshu). Whether our perception of who is good or bad is correct so far, we can’t help rooting for this ragtag team of misaligned misfits!

While some aspects of this episode felt too typical of an action spy adventure in a foriegn land – tracking down macguffins, interacting with rich and unhelpful locals and running from bad guys – there were also some wonderful Moon Knight specific additions. The return of the jarring mid-fight black outs (and the sound and visual effects that accompany them) was exciting, and I particularly liked how we got to see Marc’s side of the black out this time, as well as the hint of mystery to a mental illness we thought we understood. Seeing Marc in control for most of the episode was useful too. Just sitting with the unique characteristics, physicality, thoughts, feelings and vulnerability of this character separate from Steven’s POV was so necessary – plus his fight scenes were epic to watch.

I would be remiss if I didn’t speak about the unique depiction of Cairo – unique in the sense that it was accurate, modern, cosmopolitan and not an outdated desert filled with uneducated locals like some other media may have stereotyped in the past. Just another example of why Egyptian director Mohamed Diab and the authenticity he inspired in his crew, cast and creatives is so important to the ongoing success of this show.

The landscape and cinematography was beautiful, particularly the sun-swept scenes shot on location in Jordan, and the visual extravaganza of the star scene and the boat journey.

The continual play of psychological filmmaking and writing, clever character work and gorgeous cinematography is really cementing this show as a Marvel success story, leaving us with an edgy cliff-hanger to live in this week. Halfway through the mystery, with only three episodes left in the show, where can this intriguing escapade go next?

Fav line of the week: Finally we get some humor from Marc (and we all know Oscar can pull off the action star with the snark).

I just loved the humor that was mingled in to his first fight scene:

It added another level to Marc’s mastery of his fight skills and his confident humour, compared to Steven’s delightful, nervous ramblings (which also gratefully continued throughout this episode).