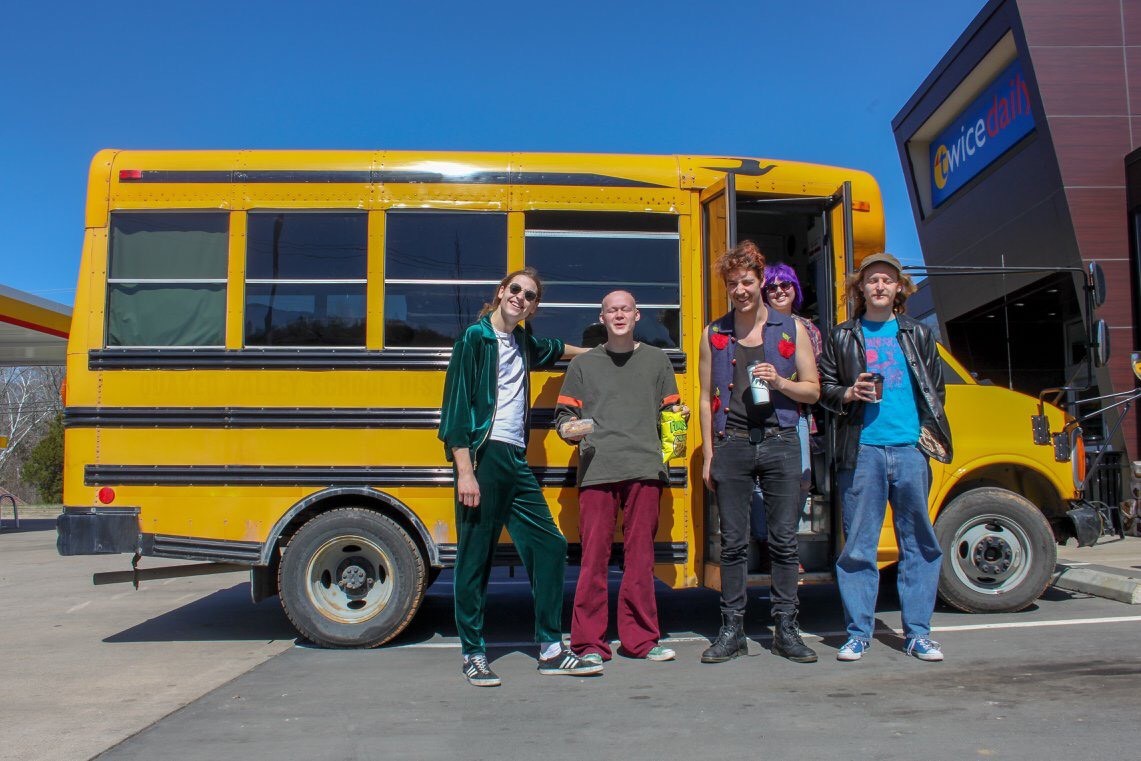 You know that moment at the end of a holiday, when you allow yourself to sink to the bottom of the pool in the full knowledge that this is your last opportunity for another year? The split second where you are simply part of the water, before physics inevitably reels you back to the surface.

Listening to Bull wraps you in the same sense of total submergence – for two minutes and fifty-four seconds you are utterly displaced by Tom Beer’s wistful irreverence.

And that’s just ‘Green’ – their debut single. Fast-following on its heels is the equally immersive track ‘Disco Living’, where the dreamy optimism of a Disney sit-com theme song and an initial, skipping maraca beat are undercut with soporific, indistinct vocals.

These two tracks announce the York band’s signing with EMI records, joining the ranks of The Beatles, Queen, Pink Floyd, and the Spice Girls. Tom Beer (vocalist and songwriter), Dan Lucas (lead guitarist), Kai West (bassist), and Tom Gabbatiss (drummer) have provided wandering tunes that play with being “retro”, paving the way for their upcoming album.

Beer is keen to disassociate Bull from “the manufactured music over the past couple of decades”, instead prizing the honesty and humour “people are crying out for” accompanied by their poppy, catchy music.

EMI’s legacy is certainly acknowledged by the band – their Twitter bio sardonically announces them as “The English Beatles”, and their following has rapidly grown since their days at York recording studio, Young Thugs.

Comically stereotypical of their new rockstar lifestyle, I talked to frontman Beer fresh from the night before’s celebrations:

“Obviously, anyone who is somewhat of a music fan has heard of [EMI]. So it’s kind of strange really. Plenty of amazing bands have been with them. The Sex Pistols obviously wrote that song about them, which is pretty funny, and still now there’s plenty of great artists that they work with. So, yes, a real honour really.”

This awareness of who they are working with plainly clear in the choice of their first release, ‘Green’ – a single first performed shortly after Bull’s formation in 2012. He says that the track: “feels like it’s not just the moment that we’re working in right now – it’s the whole amalgamation of the work that we’ve put in that is being presented in the modern day.”

University band Everything After Midnight saw their potential early on, catching Bull by chance at York venue Spark:

“It’s not often that you’re struck by a band that you’ve never heard before, especially given that they were playing in such a small space, but they were genuinely brilliant. From then on we’ve loved their music, with a personal highlight being ‘Perfect Teeth’, their set closer that night.”

However, with no venues open during lockdown in which they could capture their audience’s imagination, Bull refused to fall into the perceived high-pressure necessity for output, which anxiously filled up the feeds of music enthusiasts.

Beer said: “At the start, I kind of just thought that we wouldn’t try and force it. There was some pressure on us to continue to put out some kind of content, and we didn’t really want to do that, because unless we’re going to release something interesting we don’t really see the point in clogging up people’s minds. So we did a couple of live sets, which have been great, recording individually and, and putting that together. It was a real test and nowhere near as fun as a real gig but at the same time quite rewarding.

It was just surreal to just be sitting in my living room on my own. And then there’s a lot of people I know just popping up saying, like, “Play fucking Wonderwall” or whatever. So it was pretty fun. And really quite weird.”

However, with the oft-cited fact that Shakespeare created Lear in quarantine during the Black Death, many artists have spoken about been pressured to use lockdown as an opportunity to create. This was particularly difficult as the four members find themselves separated in isolation – a group of Yorkshiremen that met in jumbled stories of travelling the East and spontaneous, wild dancing, you get the sense that they are very much kindred spirits, feeding off each other’s energy.

Beer says, however, that unlike many of their counterparts, Bull have done well over the lockdown period.

“We’re all getting on, and just looking after each other, which is nice. We get a lot done, honestly, and I’ve been working every day. You know, from when I wake up until my girlfriend gets home from work. We’ve got a lot of things planned, a lot of videos to make, a lot of mixing, plans to record new things. I’ve been writing a lot of new songs – I’ve written about ten new songs during lockdown. We’ve definitely got the next album sorted! So it’s been really creative, and a good time for us really.”

York’s closely integrated music scene is something Beer recognises enthusiastically; they are drawn together by a “mutual appreciation”. While he notes that the uniqueness of Yorkshire itself is mapped out with the vast variety of bands, he says that “it’s not so much a unified sound or a unique sound, but just a collection of friends and people that are happy to work together and play together.”

This local enthusiasm for music is something he felt from a young age:

“When I was kid, there were really good council-run music classes. There’s plenty of great musicians in York and it’s no secret it’s partly because of good education from a young age. It’s a really pretty affluent place which obviously plays its part. People are able to afford instruments, which is obviously a luxury and a privilege but it means there’s lots of great music being made.”

This, however, has appeared to dwindle over the last few years. Music venues, such as Fibbers (which closed in January) and the Crescent, have succumbed or struggled against renovation projects.

“[Live music in York] is under threat. But I hope that people will respect how important it is and how much of a lifeblood it is for people in the city. It gives people culture and things to do, and places to go, and places to meet friends, and it’s just a no brainer to me. Let’s hope it works. I’m sure it will. I have faith”; said Beer.

For those watching the opportunities for music weaken their grip on York, Bull’s success has become a beacon of hope. Their affiliation with EMI has proved the ability of brilliant artists, given opportunities by enterprising local companies like their York recording studio Young Thugs, to break into the fabled “big time”.

The University’s own Band Society certainly see it in this way. Their president, Alex Thompson, sees this as “hopefully the first of many for bands across Yorkshire.

If this is the case, the music scene in York has so much ahead. Far from the platform we’ve seen decay as one after the other, live venues are threatened, the city’s newest success have put the cat among the pigeons, the Bull in the china shop (don’t pardon the pun – I take full pride in it).

We can allow ourselves to be hopeful for the community to return from lockdown as an iridescent stage, allowing the amazing talent our city holds to shine forth.