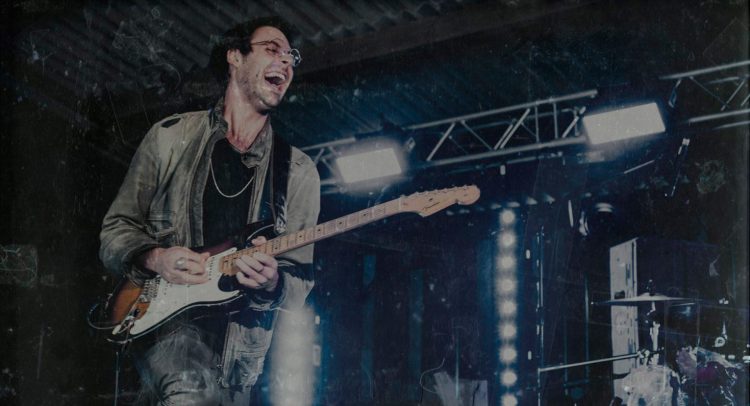 It turns out that Ulysses Wells is his real birth name and not a nod to Greek mythology.

However, his first impression left no doubt that this man was any less prestigious than the Greek hero himself – surrounded by music paraphernalia, against a backdrop of arty record covers, almost bare chested under an open denim shirt: Wells was the stereotypical calm and cool rock star.

Wells is set to release his debut EP, ‘Can’t Take it Much Longer’, later this month via Du Monde Records, a label owned by Bastille drummer, Chris “Woody” Wood, having supported the internationally celebrated band on tour.

Wells’ debut EP is the first of three EPs, all accompanied by the striking artwork of artist, Chica Seal:

“She did three pieces of artwork for me, and the first one was Contemplation, the second one was The Fight, and the third one is Freedom… three different EPs and then you can get a package, and you get three lovely pieces of art like these things here”, Wells explains, pointing to the LPs propped up on the shelf behind him.

“I just couldn’t be happier with the artist that has done all my artwork so far. She’s just brilliant and she just gets it every time”.

Once you find yourself inside the EP, you are immediately confronted with the absolutely submersive eclecticness of his influences.

This variety is partly due to his humble home county of Oxfordshire – not the first place that springs to mind when thinking of a buzzing music scene.

However, Wells elaborates on the “weird and wonderful” music scene happening just over the border, in the Warwickshire town of Shipston-on-Stour:

“There’s a guy called Tim Porter and he just puts on all kinds of music that comes from America and all over really… I guess because it is so remote that people needed that.”

Adding to Shipston’s rich music scene is Wells’ mixed heritage. “I’m quarter-Irish and half-French and then sort of quarter-English, so I have a lot of different love for all sorts of music”, he explains.

The EP’s title track, ‘Can’t Take It Much Longer’, certainly illustrates this musical diversity. Opening with flamenco-esque classical guitar, the track shuffles along in waltz time, conjuring up Celtic folk, before culminating in a booming rock crescendo. Of the song, Wells simply explains that he “just wanted to make a real journey”. In particular, the use of accordion is an intriguing feature of the instrumentation:

“My grandfather used to play the accordion,” says Wells. “I never met him but that was a bit of a tip of the hat. He was French and he lived out in the middle of nowhere. He made wine for a living and he was obsessed with playing the accordion.”

“There’s a lot of Django Reinhardt influences”; Reinhardt was a virtuoso jazz guitarist and a key figure of the historic Paris jazz scene. The song takes the listener back to the Hot Club de France in the 1930s, where Reinhardt’s quintet revived traditional jazz for wartime audiences. One of Wells’ most notable successes is this marriage between a bygone music era, with modern samples and sub bass to give the track its contemporary edge.

Discussing the diverse range of genres heard on the EP, Wells diverts, expanding on his views of ‘playlist culture’, an integral part of music streaming:

“What’s interesting with playlisting now, is that it’s becoming less and less about coherent albums and more about showing a variety inside someone’s personality as a musician”.

Certainly, in the vinyl era, shuffling songs wasn’t an option, so there was more of a focus on an album’s continuity. Wells agrees that the focus has shifted to being as musically diverse as possible, in the hope that playlists will give music a larger platform.

Despite this, Wells reminisces about his love for the warmer, more authentic sound of vinyl:

“I remember spending an entire evening just listening to vinyl… and when we went back to Spotify, and even people that didn’t know anything about [music] could just tell there’s just not that depth in [digital streaming] because it’s so squashed”.

By “squashed”, Wells references the ‘loudness war’, the phenomenon of raising a song’s volume with compression, whilst collateral damage is done to its dynamics. This deceives the human ear into believing that louder equals better, whilst the track actually sounds flattened by the process.

Of course, the Covid-19 situation was inevitably mentioned, with Wells having a rough time during the pandemic, struggling to pay London rent whilst juggling two jobs.

But it wasn’t all doom and gloom:

“Covid was horrible, but for me, it was actually kind of a blessing in disguise, because… I could just literally focus on writing and recording the next three EPs. And so in a way it’s been great…, because it just put the brakes on in the busy world that we live in”.

The pandemic meant Wells ending up recording in his sister’s London flat, or “cupboard”, as he calls it. Despite discussing such claustrophobic recording sessions, that occurred during a difficult time for Wells, he still jokingly remarks of his poor neighbours:

“I think they couldn’t take it much longer to be quite honest with you, like they had really had enough of me screaming into a cupboard.”

Wells believes that the hard bit about recording alone is not the logistics of sending files and songs remotely, but the loss of the atmosphere that a band brings to the table:

“When you’re in a room with someone…, you’ve got a bit of an energy thing going on, whereas if you’re on your own and you’re just doing take after take…, you don’t know what you’re trying to achieve anymore.”

Of course, lockdown has been challenging for countless solo artists recording alone, but creating music is an important catharsis, and an overall boost to mental health. Wells maintains that the effort is worth it in the end, with a simple piece of insight that applies not only to the creation of his EP, but to any challenging project that pays off:

“You put yourself through that if you want to do it”.