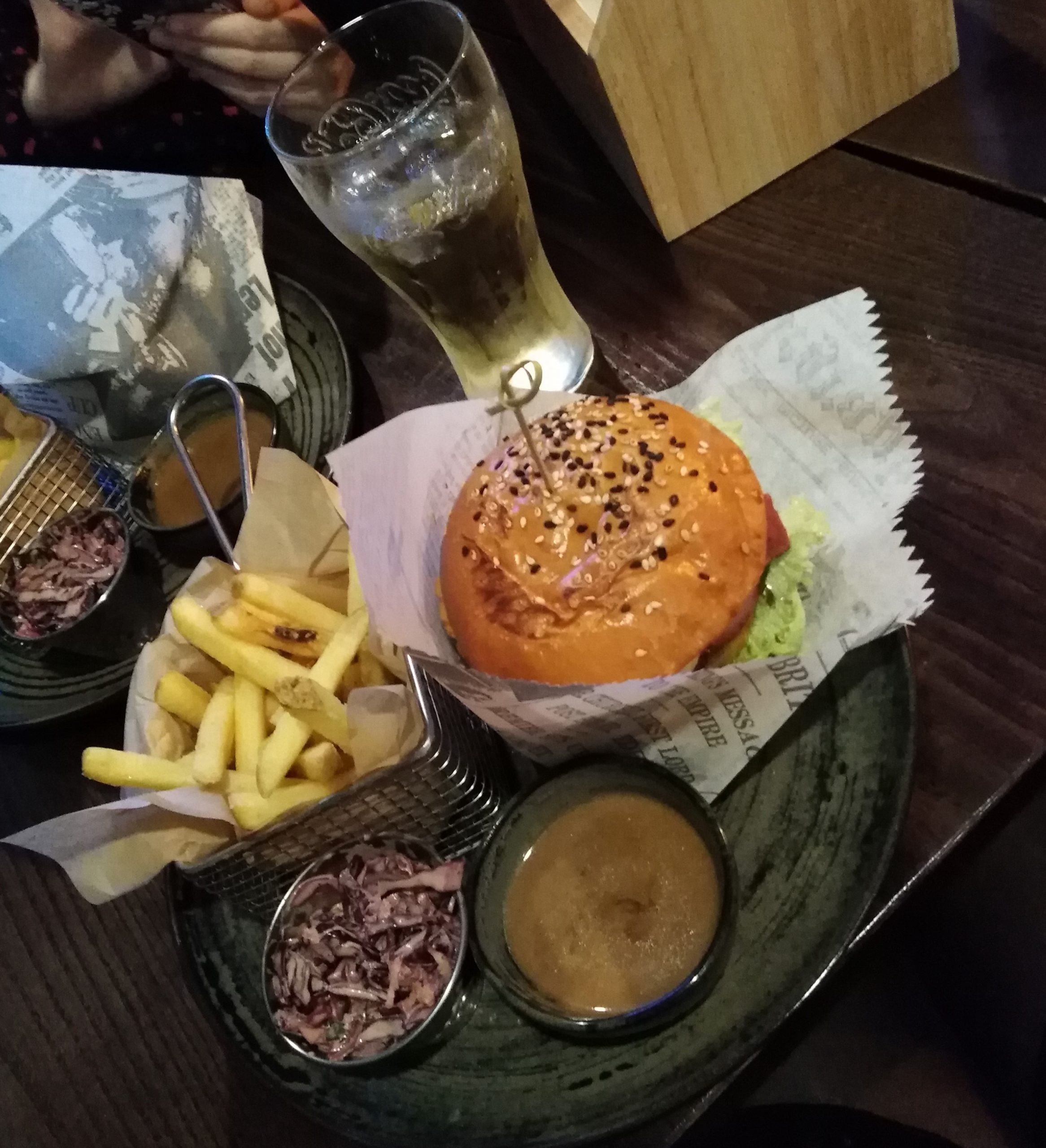 The first thing you notice about Bull & Co, is its pea-green framework on Walmgate. Upon entering the restaurant, the green theme continues, with decorative artificial grass covering the walls – besides the massive picture of a buffalo (or Highland cow? My friends and I were unsure).

The overall interior is modern, clean, and generally quite welcoming. After scanning the obligatory QR code, we moved to a table towards the back of the restaurant, in full view (for me at least) of a bright neon sign reminding us of what food was on the menu: “burger”.

And so, to the burgers. The main thing (besides the green paint) which originally attracted me to this restaurant, was a small sign in the front window saying “student deal: any burger + a drink + a side for £12, Monday to Sunday”. Being a broke student who enjoys food, I was automatically lured in with the prospect of a student meal, and didn’t need the neon sign to tell me why I was there.

Whilst all the burgers looked amazing, and I was particularly tempted by the “Chick” (unsurprisingly, a chicken burger) and the “Pig Out” (pulled pork) I eventually followed my other two friends and went for a “King”, described as “toasted Haxby bun, 6oz onglet steak, fried egg, lettuce, gherkin, red onion, tomato, black garlic mayo & peppercorn sauce on side”.

Our reasoning for choosing this burger (besides the fact that it sounded – and was – delicious) was that alone it cost £10.50, the most expensive of the burgers available, thus for the student deal, the best value. Along with this I ordered a side of skin-on fries, and an Appletizer (the student deal only includes soft drinks sadly, so no alcohol or the very exciting sounding milkshakes they also offer).

The food arrived reasonably quickly, and was presented diner-style: a metal basket of chips, a burger sitting on a (fake) newspaper, and two industrial-style metal pots, containing a small portion of coleslaw, and the peppercorn sauce.

My first reaction was to dip one of the chips into this sauce and I am very glad I did so – whilst the sauce was not thick as say a ketchup would have been, it coated the chip lightly, providing a delicious and not overpowering peppery taste.

I then moved onto the coleslaw, which I was pleasantly surprised by. Not only did the menu not advertise it coming with the burgers, but it was actually really good, and I could tell they’d put effort into making it.

Eventually I gained enough courage to tackle the burger. It was huge, and we all soon decided to cut them in half in order to eat them properly. As there was a fried egg in each, this immediately caused egg yolk to go dripping down the sides of the buns: delicious, but incredibly inelegant. The steak was delicious, super tender and blending so well with the combined flavours of the garlic mayo and gherkins.

I will say that I feel like the mayo could have been more intense – I’m a huge garlic mayo fan and was really excited by the prospect of “black garlic mayonnaise”, but the flavour was somewhat overwhelmed by all the other tastes going on, meaning that it wasn’t clearly there. I ended up pouring some of the peppercorn sauce on (which had the added bonus of warming the burger up a bit – the lettuce and tomato had caused it to cool down a bit too quickly for my liking), adding a stronger flavour to the mix.

By the end of this, as you can imagine, I felt incredibly full, but very happy, and already looking forward to getting back and trying other items on the menu.

If you like steak, or burgers, or are just interested in trying something new (they do cater for vegans and vegetarians as well, although don’t have such a wide range of options) I would strongly recommend Bull & Co.

Sure, it’s not the cheapest burger place in town, but the student deal certainly makes up for that, and the whole place makes for a really nice night out.