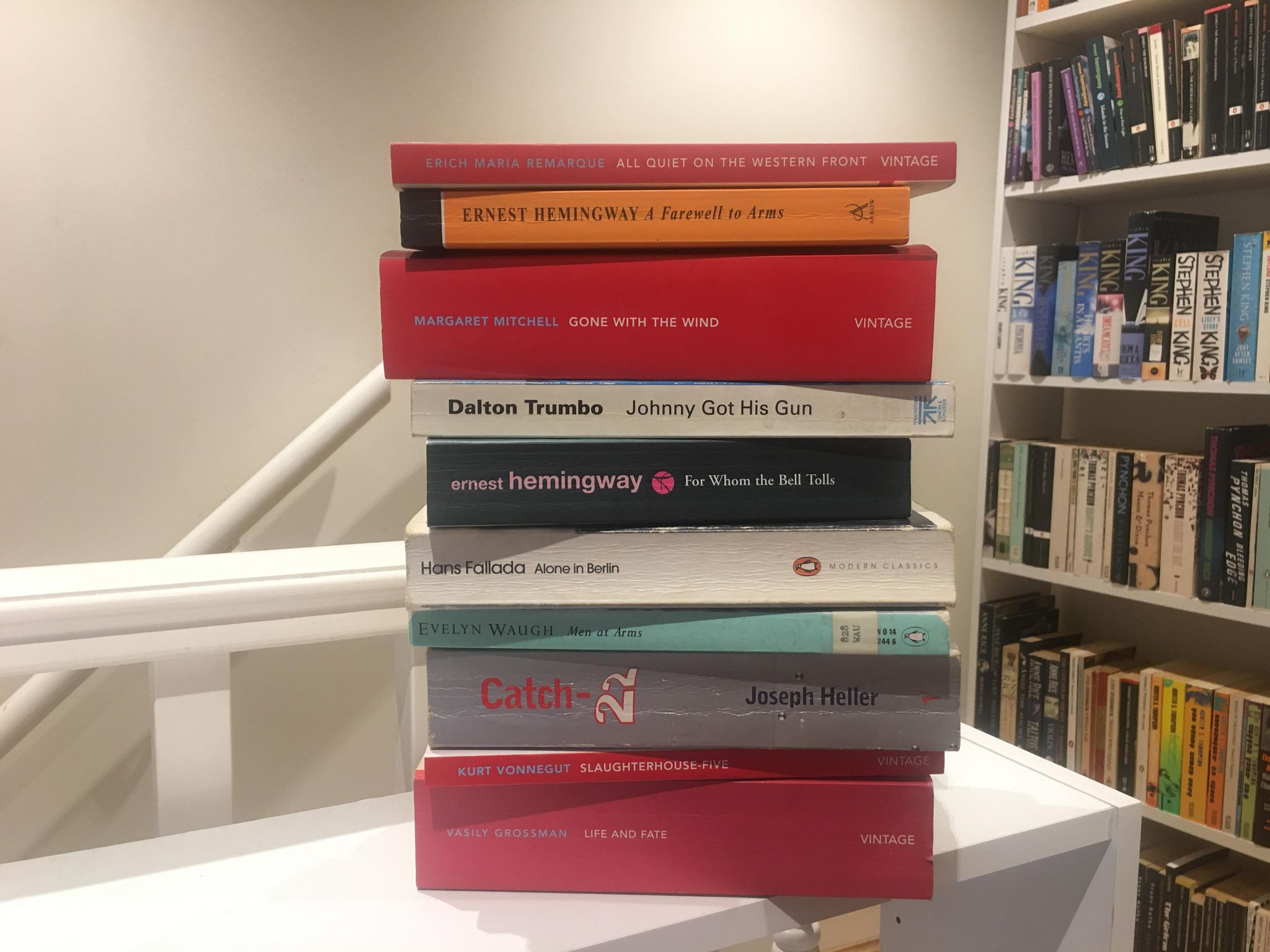 November 11th is kept as annual day of remembrance, held to honour those who lost their lives in the line of duty. It marks the anniversary of the conclusion of the first world war and is observed as Veterans’ Day in the United States, Armistice Day in much of mainland Europe, and Remembrance Day here in the United Kingdom.

War is a divisive and painful topic, it emotes everything from pride to shame, sorrow to glory, and fear to relief, with the lasting legacy, often coming long after the conflicts conclusion, when the true cost of war is realised.

Literature, like screen, stage, or gaming, has never been a medium to shy away from the topic, with countless novels covering every genre trope from the glory of conquest to the significant emotional and psychological distress of the battlefield.

The vast variety in the military/war genre has produced some of the most compelling examples of western literature in history, from the ancient works of Homer and Virgil to that of McEwan, Bowdern, and Clancy. Here we shall consider the topics most significant literary examples from the twentieth century; a century overshadowed by two world wars, multiple civil wars, and the longest cold war in history.

An important note: the title of this piece does not refer to good, or bad, or ugly books, but to the literary demonstrations of the good, the bad, and the ugly sides of war.

All Quiet on the Western Front by Erich Maria Remarque is a crushing examination of the psychological harm posed by war, and the consequent difficulty of reintegration into society. Perhaps the most significant theme of the novel, however, is the danger of nationalism.

The book tells the story of 20 year old Paul Bäumer, a German soldier on the western front during the first world war, focusing on the tribulations he and his platoon-mates experience.

This novel is simultaneously excellent and terribly depressing; it provides first hand account of the horror and truth of war, and how extreme combat situations affects people, physically, emotionally, and psychologically.

The first but not the last example from Ernest Hemingway on this list, A Farewell to Arms, whilst published in the same year as All Quiet on the Western Front, could not be more different from Remarque’s opus. Concerned with love and war, this is by no means a feel good romance novel, but it is certainly a less gritty interpretation of war fiction.

A Farewell to Arms, set against the backdrop of the Italian campaign in the first world war, follows the love affair of Frederic Henry, an American serving in the Italian army as an ambulance driver, and Catherine Barkley, an English nurse stationed at an Italian hospital.

Widely regarded as one of Hemingway’s greatest novels, A Farewell to Arms is a semi-autobiographical account of Hemingway’s own experiences during the first world war.

Gone with the Wind by Margaret Mitchell is unlike any other book listed, firstly, its protagonist is female and secondly, the conflict in which it is set is not contemporary to its publication.

Set during the American Civil War, Gone with the Wind is the story of [Katie] Scarlett O’Hara, the daughter of a formerly wealthy plantation owner who must struggle to rebuild after Sherman’s March.

In 2014, this novel ranked second in a survey to find America’s favourite book, to put into perspective its popularity, it was only beaten by The Bible. Whilst closer in genre to a historical romance or coming-of age story, the significance of Gone with the Wind as a war novel is in its demonstration of the impact conflict has on civilians.

Set in the first world war and published only 2 days after the start of the second, if this list were to be reordered by merit, then Johnny Got His Gun would subjectively be first. This novel is an exceptional anti-war treatise, not only for its writing but for its soul crushingly depressing story, recited by the most unfortunate narrator.

Johnny Got His Gun by Dalton Trumbo follows the reminiscences of Joe Bonham, a young American soldier who awakens to black in a hospital bed following the blast of an artillery shell.

Editor’s Note: If I were to recommend a book from this list, it would be this one.

For Whom the Bell Tolls is the second Hemingway novel on this list; published 11 years after A Farewell to Arms, it again incorporates semi-autobiographical elements, this time from Hemingway’s experience as a journalist during the Spanish Civil War.

The Novel follows Robert Jordan, an American explosives expert fighting for the Soviet supported Spanish Republic against the Nationalists of Francisco Franco.

Whilst at times famously graphic in its depiction of the brutality of war, For Whom the Bell Tolls prominently features the themes of comradery, sacrifice, and death. Interestingly juxtaposed with other anti-war literature, the novel is less concerned with the future psychological harm posed by involvement in conflict, but more so with the fear of imminent danger experienced by those involved.

Alone in Berlin, also known by the appropriately depressing title Every Man Dies Alone, by Hans Fallada was one of the first German anti-fascism novels published after the end of the second world war.

Based on the true story of Otto and Elise Hampel, Alone in Berlin is set in 1940 Berlin and revolves around the spreading of anti-fascism pro-resistance propaganda postcards. This civil disobedience creates a palpable sense of tension due to the ubiquitous threat of detection and punishment.

Written in only 24 days, this novel demonstrates a rather unique interpretation of the war novel. Not focusing on the experience of soldiers but instead on civilians willing to risk their lives and humanity in spreading a message of revolution. Fallada is a prodigious writer, this novel, as with so many other war novels is not a happy book but his ability to manipulate an atmosphere of tragedy, makes this one of the best in the genre.

Men at Arms by Evelyn Waugh is the first book in the Sword of Honour trilogy, and significantly the first example of the war satire novels on this list.

The Novel follows Guy Crouchback, an aristocratic divorcee training to become an officer in the Royal Corps of Halberdiers; his training, however, is not without an almost endless series of blunders.

Whilst this novel, is not concerned with the physical, emotional, or psychological harm of war, it does take a sardonic view on the bureaucracy inherent in the twentieth century military. The emergence of satirical war novels, marks an interesting deviation from the norm; with the elected method of anti-war pontification coming not from tales of horror but from tales of humor, mocking the conflict and those responsible for it.

Perhaps the best known satirical war novel is Joseph Heller’s Catch-22. Based on Heller’s own experiences as a bombardier in the second world war, Catch-22 is a hysterical, endearingly convoluted, damning denunciation of military bureaucracy and war itself.

The plot of Catch-22 follows the desperate attempts of Captain John Yossarian and his squadron-mates in surviving the second world war, a task made ever harder by the ever raising number of combat missions required for discharge.

Perhaps the most lasting impact of Catch-22 is the title itself. The phrase catch-22 has been incorporated into the English vernacular to describe an illogical situation in which the circumstance deny the solution; if that alone doesn’t tell you something about this book I don’t know what will!

Slaughterhouse-Five by Kurt Vonnegut is an incredibly difficult book to follow, in part due to its non-linear order, unreliable narrator, and reliance on time travel and flashbacks as framing devices. Despite this, however, Slaughterhouse-Five has developed a cult following and is one of the most renown satirical war novels.

The novel, is told from the perspective of an anonymous narrator, theorised by many to be the author himself. The mystery narrator tells the story of the life and experiences of Billy Pilgrim from birth to post-war; however, not in that order.

For as esoteric as it is, Slaughterhouse-Five is full of symbolism and themes relating to death, religion, and mental illness; the ultimate message being that war is destructive, dehumanizing, and incomprehensible.

I don’t get it, maybe you will?

Life and Fate by Vasily Grossman was written in 1960 but an attempt at publishing it in that same year lead to the KGB raiding Grossman’s apartment and seizing his manuscripts. It was not until 1974, 10 years after Grossman’s death that a hidden duplicate manuscript could be smuggled out of the Soviet union allowing Life and Fate to finally be published in 1980.

Life and Fate is a true masterpiece of twentieth century literature; a sprawling, multifaceted epic divided into three parts with its core narrative focuses on the lives of Viktor Shtrum and the Shaposhnikov family on the eastern front as the battle of Stalingrad looms.

This novel offers a crushing indictment of Stalinist Soviet policy, anti-semitism, and propaganda, whilst awarding the reader a sobering look at the reality of war. Depressing at times, but ultimately, as thematically acknowledged throughout the book, life goes on.