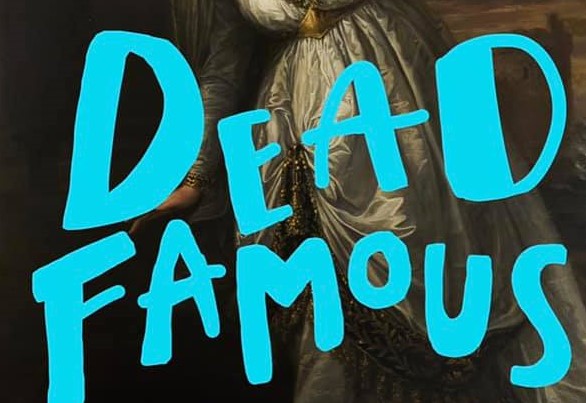 Returning to York at twice the age that he first arrived, ex-Vision writer Greg Jenner speaks to Vision about his second book: Dead Famous: An Unexpected History of Celebrity from Bronze Age to Silver Screen. He credits York as being “where I started to get the hang of writing funny stuff”. However, while at York he wrote anonymously, and “wasn’t brave enough to stand up and do it myself”, he is now the face of history podcast You’re Dead to Me, alongside writing for Horrible Histories and hosting shows across radio and television.

V: What value do you think Horrible Histories has over a more traditional documentary?

G: The wonderful thing about it is that it makes learning enjoyable. If you can get someone enthusiastic and enjoy something, they’re much more likely to retain the information and learn more about it. If you get kids excited at the age of seven or eight, maybe they’ll enjoy it for the rest of their lives.

“I probably will never do anything as good as Horrible Histories.”

V: Do you find it difficult to switch between that style of work and shows like Inside Versailles?

G: I’m always, first of all, a historian, which means that you’ve got to make sure the accuracy is there, the rigour is there, that you’re representing the complexity of the debate. Drama is different to comedy, because you’re not trying to make people laugh. You’re trying to get people sucked into the story and care about the characters. I guess ultimately I just feel like a historian who enjoys pop culture.

V: If you had to pick, which would you say you prefer?

G: I think the joy of what I do is that I get to work in lots of different mediums. If you get a bit jaded with one, then you suddenly bounce onto the next and it’s a different challenge; a new, fresh injection of enthusiasm because it’s different to the last thing. You’re working with different people, and a different audience, so the variety is what’s part of the fun.

V: Speaking of your book, how does it feel to finally be publishing it and doing interviews after four years of work?

G: It’s very lonely writing a book, then suddenly it goes everywhere and you have to go around telling people why it’s good, and why they should read it and spend money on your thing. People who have read it so far have been very nice about it. It’s really nice, but it is terrifying. I think if you speak to any author, there probably is an element of fear. That no one will care, no one will read it, and the other fear that “Oh my God, what if people do read it”, and then there’s the fear that they will criticise you or won’t like it.

V: You’re already an experienced writer though, so you’ve obviously found a way to get over fears surrounding publishing these works. Do you feel like you have any advice for aspiring writers?

G: I learned to write by blogging. At university you write essays, dissertations – I used to write comedy plays. But the way that I got my first book deal was by writing funny history blogs for the Huffington Post. I’m a slightly curious historian because I’m probably more influenced by Charlie Brooker than I am by Simon Schama. Also, practice is hugely important, and reading. All the best writers love reading and writing. They love reading other people’s work, they love reading novels and nonfiction books and journalism and blogs, they enjoy song lyrics and poetry. You have to bask in other people’s creative talent and gradually you’ll find what your voice is. But the only way you can get better is by experiencing and being exposed to good writing.

V: There seems to be two parts to your work: one behind the screen as a researcher and the other, which is very much public. How do you manage that?

G: It took a long time for me to build the confidence and think that maybe I had things to say. So [with Michael Gove’s educational plan] that felt like something that I had experience in. And it turned out people would ask me about other things as well. I did specialise in historical dramas – I wrote my MA about movies about King Arthur – so I’ve often been asked to speak about historical accuracy when a movie comes out or a drama comes out.

V: Do you think all of this experience in the media and with social media made you want to write this book about celebrity?

G: What I’ve done in my book is to try and chart when celebrity began, and why do we care so much about it? How does it affect society? Is it beneficial to society? Is it harmful? What kind of celebrities were there in the 19th century? And where are we going next? We now have influencers on social media – I don’t think they count as technical celebrities, but they’re very similar. So my book, unfortunately, has become more topical [with the passing of Caroline Flack], which is not very nice, really. But I do think we need to be talking about this stuff. It’s interesting to see the petitions [to boycott tabloids accused of playing a role in Caroline Flack’s death]. I don’t know if anything will change, because ultimately, celebrities are so deeply entrenched in every aspect of our society and culture, politics, entertainment, how we talk about morality and ethics and how we should raise our children. You can write petitions and say that we’ve got to be nice and respectful and kind. The media has a responsibility to ensure that people are not hounded. But it’s quite hard to turn the ship around – because we care, we’re really interested. But I think the tragedy of Caroline Flack and all those other people who are suffering will hopefully make things a little bit more kind. It’s hard to be optimistic about it because it’s been going for a long time.

V: Speaking as someone who was involved in cultural journalism through Vision, what do you think the role of journalism is in managing this conflict of ethics and demand?

G: Journalism is paid for by people, and people will buy the product that they want. And there is a social feedback loop where people are given what they asked for. If newspapers and media stopped doing it, then maybe their revenues will fall, and maybe people will stop buying newspapers. And so there’s a kind of vicious circle going on there. The Guardian is just about turned around, it’s in huge debt costs, but the Telegraph is cutting jobs. I think a lot of newspapers and media bodies are going under or are struggling. And the one thing that helps them sell papers are celebrities, so the ethics of it are complicated because ultimately, that business model relies on celebrity culture. My job as a historian is – my book stops in 1960 – my job is to go, “Well look, this has been happening a long time. And here’s why.” I’m asking questions and trying to explain how it began.

“I don’t think I think that comedy is the opposite of seriousness. I think they should be hand in hand.”

V: When you look at your work, it is quite easy to make things so serious and look at the wider context of society and ethics and our culture. But in reality, a lot of your work is quite light hearted in tone. Do you think anything’s lost or gained in being light hearted?

G: People often say to me, “You’re not taking it too seriously.” And I respond by saying I’m taking these issues deeply seriously, and that’s why I laugh about it. Because I think humour is not the opposite of seriousness. I don’t think to laugh is to denigrate or to diminish something. I think laughter is a powerful tool. I think laughter can forge a wider community and bring us together. I think it gives us joy and hope and also, can help us remember things. I can quote you bits of comedy that I saw when I was 12 years old. I can quote you entire stand up sets by Eddy Izzard. But I can’t quote you documentaries I saw last week. And that’s simply because from a neurological point of view, laughter and horror are two things that sear themselves onto our brains. And when we laugh at something, and when we are terrified by something, we’re much more likely to remember it than if we’re mildly intrigued by something. You’re Dead To Me is a show where you have a comedian whose job it is to be funny, and interesting, but you also have someone with a PhD. And there’s no other podcast I’m aware of where we give equal weighting to the academic expert, with years of nuanced knowledge, and to the comedian. I don’t think I think that comedy is the opposite of seriousness. I think they should be hand in hand.

V: When you mention things sticking with us, when we were testing the microphone we were trying to remember the different Horrible Histories songs. Do you find that you have such a standout favourite contribution?

G: We have made over 130 songs, probably 2000 sketches. We made a movie. It’s 11 years of my life. The first five series were full-time, pretty much 15 months per series. Horrible Histories was every single day, including weekends for five or six years, and then we took a year off and then we came back and reset the show with a new cast. Since then, I’ve been a bit more part time and I have a team of researchers with me. What I loved the most about it was when you get to see kids who know the songs and who know the history because of it. One of my favourite moments was being on a tube in London and seeing a little kid probably no more than six years old with his mom and sing the Four Georges song and his mum went, “ah, not again”. Those are the moments where I kind of feel, “yep, this is worth it”. About three years ago, for the first time, I was lecturing undergraduates who had grown up on Horrible Histories. They were 10 when it came out, and now they’re 18, 19, 20. To see an entire lecture hall full of young history students who’ve decided to pursue history as a subject, taken out a loan, they’re hoping that this is going to be something that gives them great joy and career prospects. And the fact that Horrible Histories is part of that conversation for them to me is the greatest achievement. I probably will never do anything as good as Horrible Histories. It’s a show that has helped shape an entire generation in some ways (and that’s not just me, I’m one of many, many people who work on the show).

V: You keep mentioning your enthusiasm and passion. Would you say this is the key to success?

G: Sometimes I still think maybe I should be a lawyer. I love what I do. It’s the most rewarding job in the world because I care about it and because it’s what I joined the TV industry for. I don’t know what it is about me that other people enjoy working with and obviously they continue working with me so hopefully I haven’t rubbed them up the wrong way too much, but I guess I have enormous passion for history. Every day, there’s something about it that just gives me joy. Even when it’s incredibly hard work and really stressful. But the end result is always so much better. I’m very lucky.