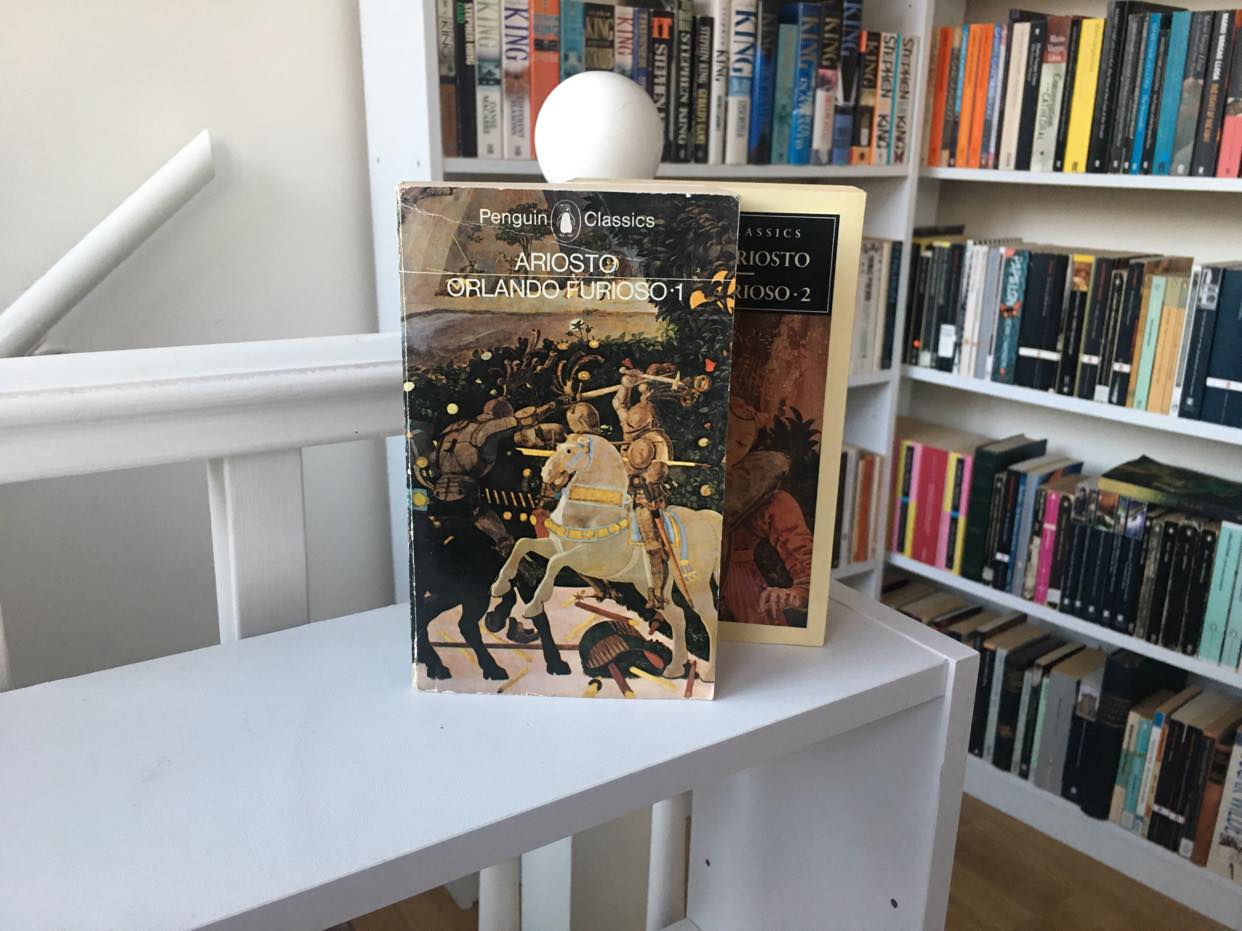 Written by Ludovico Ariosto between 1506 and 1532, under the patronage of the Ferraresi Cardinal, Ippolito d’Este, Orlando Furioso is an Italian Renaissance heroic epic poem in 46 cantos. Set to the backdrop of fictional war between Charlemagne’s paladins and Agolante’s invading Saracen army, Orlando Furioso is the technical continuation of Boiardo’s unfinished Orlando Innamorato (1483-1495).

Much of what is known of the real world Orlando (?-778) (also known as Roland or Rolando) comes from the biography of Charlemagne, Vita Karoli Magni (c. 779); as stated in the biography, he was a Frankish military leader and governor in the army of Francia. Roland’s significance in life and purportedly heroic death at the Battle of Roncevaux Pass afforded him a substantial legacy in the world of literature and song; he obtained a mostly heroic position as a principle figure in the Carolingian cycle of Medieval literature. Notable medieval examples of Orlando’s characterisation in literature include, Girart de Vienne (c. 1180), Chanson d’Aspremont (c. 12th century), and La Chanson de Roland (c. 1040-1115), the earliest extant example of French literature.

Roland’s place in early French literature was followed in the Renaissance period poetry and prose of Italy; the early utilisation of Roland as a character (under the name Orlando) in Italian literature was predominantly in chivalric and romantic verse. Examples include, Divina Commedia (1308-1320) by Dante, Morgante (1483) by Pulci, Orlando Innamorato by Boiardo, and most significantly Orlando Furioso by Ariosto.

Divided in 46 cantos in the Ottava Rima rhyming scheme, Orlando Furioso is a multi plot episodic chivalric romance epic poem set in France, Spain, England, the middle east, and temporarily, the Moon. The most seminal episodes focus on the titular protagonist, Orlando, and his unrequited love for the princess Angelica. For those of you familiar with later chivalric romance novels such as Don Quixote (1605 and 1615), you will appreciate the plot device of the maddening, almost all encompassing hypnotic power of chivalric love; this combined with the previously mentioned war, a plethora of mythology inspired events and creatures, and many other intertwining narratives, make up the backbone of the poem.

Whilst a trip to the Moon on a flaming chariot may immediately catch your attention as a rather unusual setting for Renaissance poetry set to a religious war, it is the inclusion of numerous mystical fantasy creatures, such as the giant sea monster, and a Hippogriff (half eagle, half horse) which most differentiate this epic from its contemporaries, and previous iterations of literature featuring Roland.

This brief summation fails to capture any of the charm or magic of the text; my favourite Goodreads.com review summarises the poem quite succinctly stating, “All sorts of wonderful crap happens.”

Beyond its appeal as a preeminent example of Renaissance epic poetry, Orlando Furioso is renowned for its cultural significance; the poem has been cited by literary scholars as an influence on many seminal writers from Spencer and Shakespeare, to Borges and Rushdie. Moreover, its legacy extends beyond the medium of poetry and prose, having influenced great examples of opera, music, and Art. Perhaps the best known examples are Vivaldi’s 1727 opera Orlando Furioso, Handles 1733 opera Orlando, and Hayden’s 1782 opera Orlando Paladino.

Whilst Ariosto’s epic opus is not nearly as contemporarily popular as Dane’s, Virgil’s, or Homer’s; and whilst it is one of the longest European poems, at a laborious 38,736 lines, it is certainly a poem worth reading if you appreciate the history, art, and/or literature of the period. Whilst at first glance, Orlando Furioso may appear to be a dull pastiche of chivalric romance, it is in reality, deceptively witty, sarcastic, and funny. Do not let its massive size put you off, Orlando Furioso (especially the Barbara Reynolds translation) is certainly a text I would recommend to all who enjoy the poetic style of Dante’s Divina Commedia, or Petrarch’s Africa.