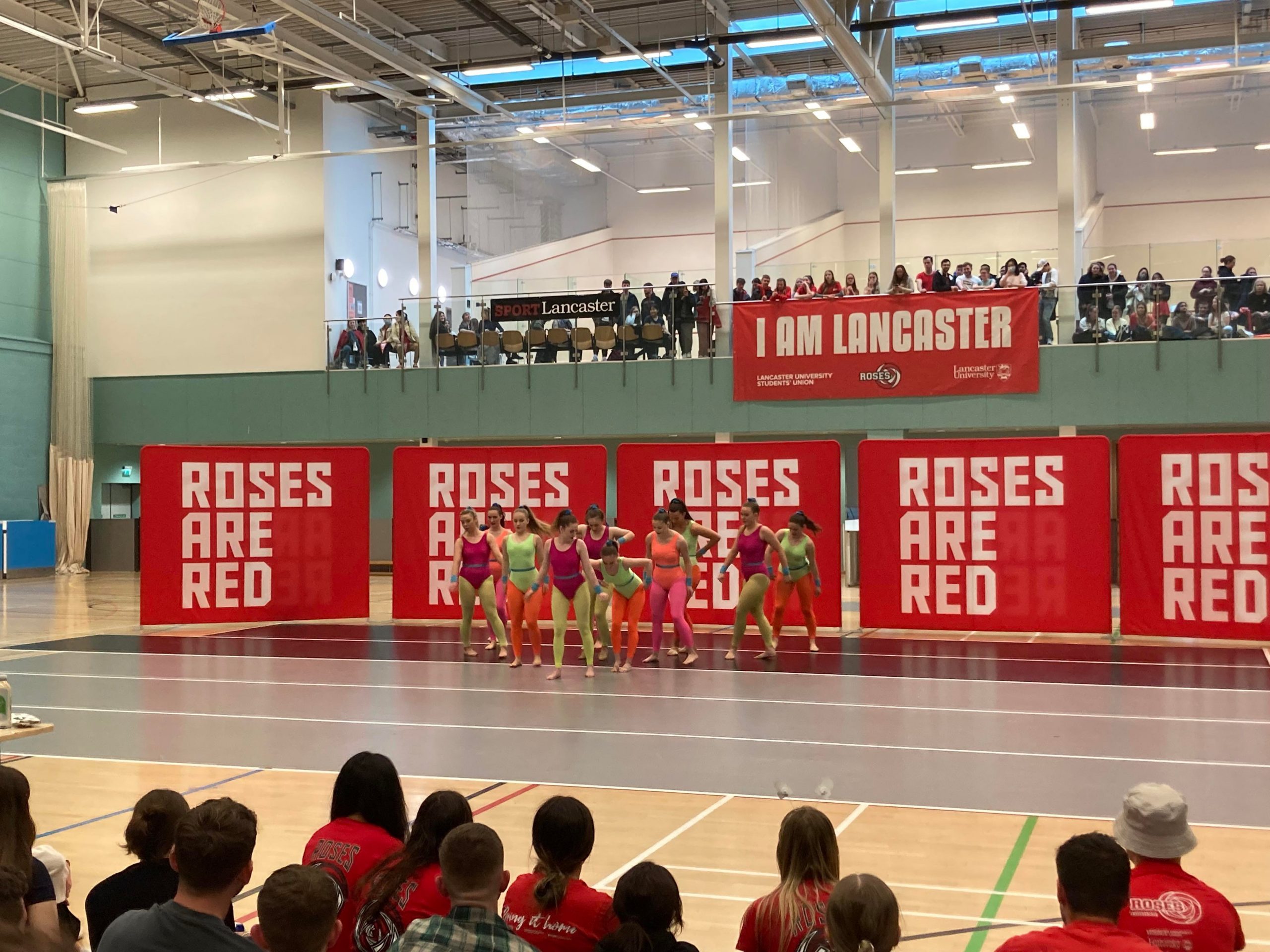 One ballet dancer noted that she was “feeling nervous” but “really excited too,” before the performances began.

The first dance was ballet, which began at one o’clock with York’s “Masquerade”. The ladies entered with elegant burgundy dresses and masks, with lots of impressive graceful movement. They scored 226 but were beaten by Lancaster’s performance scoring 244.

Lancaster’s performance had a story element to it which I interpreted as a battle for women’s reproductive rights. Three dancers were dressed in colored skirts (representing women) and five in tuxedos (representing men), the ones wearing skirts danced in holding paper with an image of DNA on it but by the end the tuxedo’s had taken the paper and torn it up. It was a really clever and creative performance from Lancaster.

Following a cheery interlude, the next performance was contemporary. York began with a slower dance with a ripple effect around the central dancer, which got a great reaction from the crowd. The pace then began much more fast and serious, with a heavier beat and more synchronisation. The performance also included a very impressive flip involving four people.

Lancaster’s contemporary followed this, involving lots of levels. The crowd were particularly impressed with one lift where a girl was held up in a cross position.

Contemporary was incredibly close, with one point in it but ultimately Lancaster secured a victory 256-257 points.

Tap followed this, which again was a really close call. York came on dressed in black suits and with burgundy ties. They performed a Charlie Chaplin-eque dance, it was really cheeky and upbeat.

This was again followed by an upbeat performance of “Fabulous” by Lancaster, involving lots of shimmies and hip movement which went down well with the crowd. The interludes really helped keep up a positive atmosphere at the dance.

After the half-time interlude, the lyrical performances began with York entering in purple floaty dresses. It was a very elegant performance with a good use of levels. It scored 255.

Lancaster’s performance ‘Lover of Mine’ which involved lots of dramatic movement and impressive partner work, scoring Lancaster a solid win with 283.

The penultimate dance was jazz which York also lost 260-289. York’s performance was a neon 80s upbeat theme, involving a use of chairs to dance around which made for an interesting watch. It was vibrant and lively.

Lancaster followed with “Blue Monday”. All the dancers dressed in blue with slick buns in their hair. There was a lot of attitude and cheek in this dance, and it was a really impressive performance. A particular highlight was the pirouettes done by the judges named best dancer Elise Woodland.

The final dance was Street which saw a win for York, scoring 271, six points more than Lancaster. York’s dance was called “Bow Down” and performed with lots of confidence. There was a section danced to Dolly Parton’s 9 to 5 with a bit of country inspiration which was great to watch.

Lancasters final performance was “Fired Up” which involved lots of sharp movements contrasted with more smooth ones. It was a very energetic performance.

Though York lost, many of the dances only had a few points in it. It was a particularly nice sport to watch due to the sportsmanship shown by the Lancaster side, who cheered on the York team. Seeing this comradery was very refreshing in such the harshly Lancaster-dominated crowds.