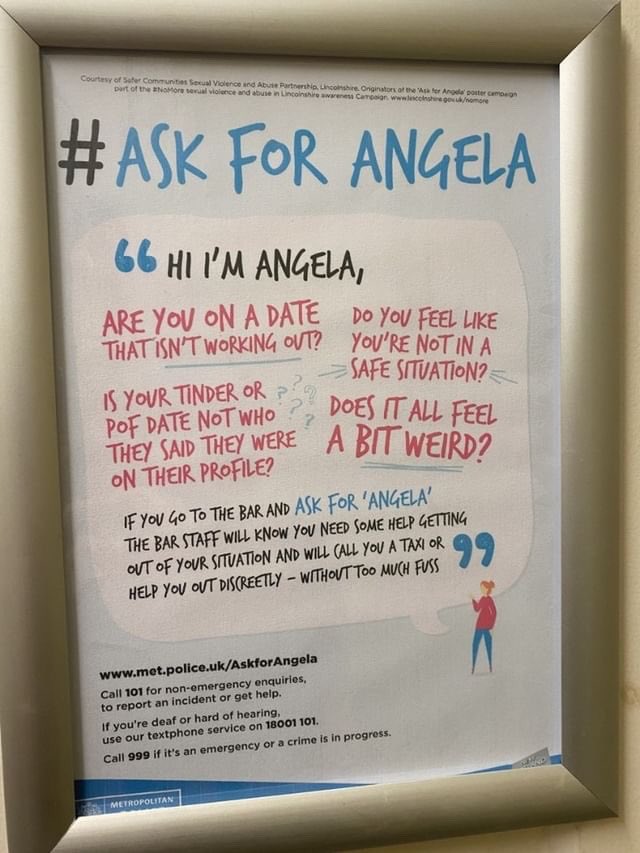 North Yorkshire Police recently said online that “anyone who feels uneasy or unsafe just needs to approach the bar or any member of staff and ask for ‘Angela’ and the staff member will know to assist this person by helping them to discreetly leave”. The scheme has been rolled out nationally, making the code word common knowledge.

I first came across an ‘Ask for Angela’ poster inside a cubicle of the ladies’ bathroom in a local Wetherspoon. The posters were hidden inside the stalls, meaning that only women would be able to access the information. However, local police forces have released the posters across the internet, meaning that everybody now has access to this information. I can see why they did this, as this information could be lifesaving. However, sharing the meaning of ‘Ask for Angela’ undercuts the meaning of a code word.

By releasing this information publicly, already vulnerable individuals could be put at increased danger. Instead of being a lifeline, ‘Ask[ing] for Angela’ could draw the attention of predators, as well as put the victim at further danger from their perpetrator.

There have been reports of people being ignored, laughed at, or misunderstood by nightclub bouncers upon asking for Angela. Similarly, there have been statements of venues displaying signs with the information, but staff knowing nothing about the scheme. One Facebook user claimed that they felt “stupid” for asking. This entirely defeats the object of the scheme, which aims to help the most vulnerable and at-risk individuals.

It takes a lot of courage to ask for help, regardless of the situation. Female presenting individuals are unfortunately more likely to experience sexual assault or harassment than men, making their safety in places where alcohol is consumed paramount. Pubs and bars should be safe, open spaces for women to meet dates.

As the North Yorkshire Police Facebook post said: “For those who’ve seen the fear and anxiety in the person who has barely been able to whisper these words, you’ll know they come from someone who feels in immediate danger and needs help to get home safely.” The current scheme is a step in the right direction, but isn’t enough for those most at risk.