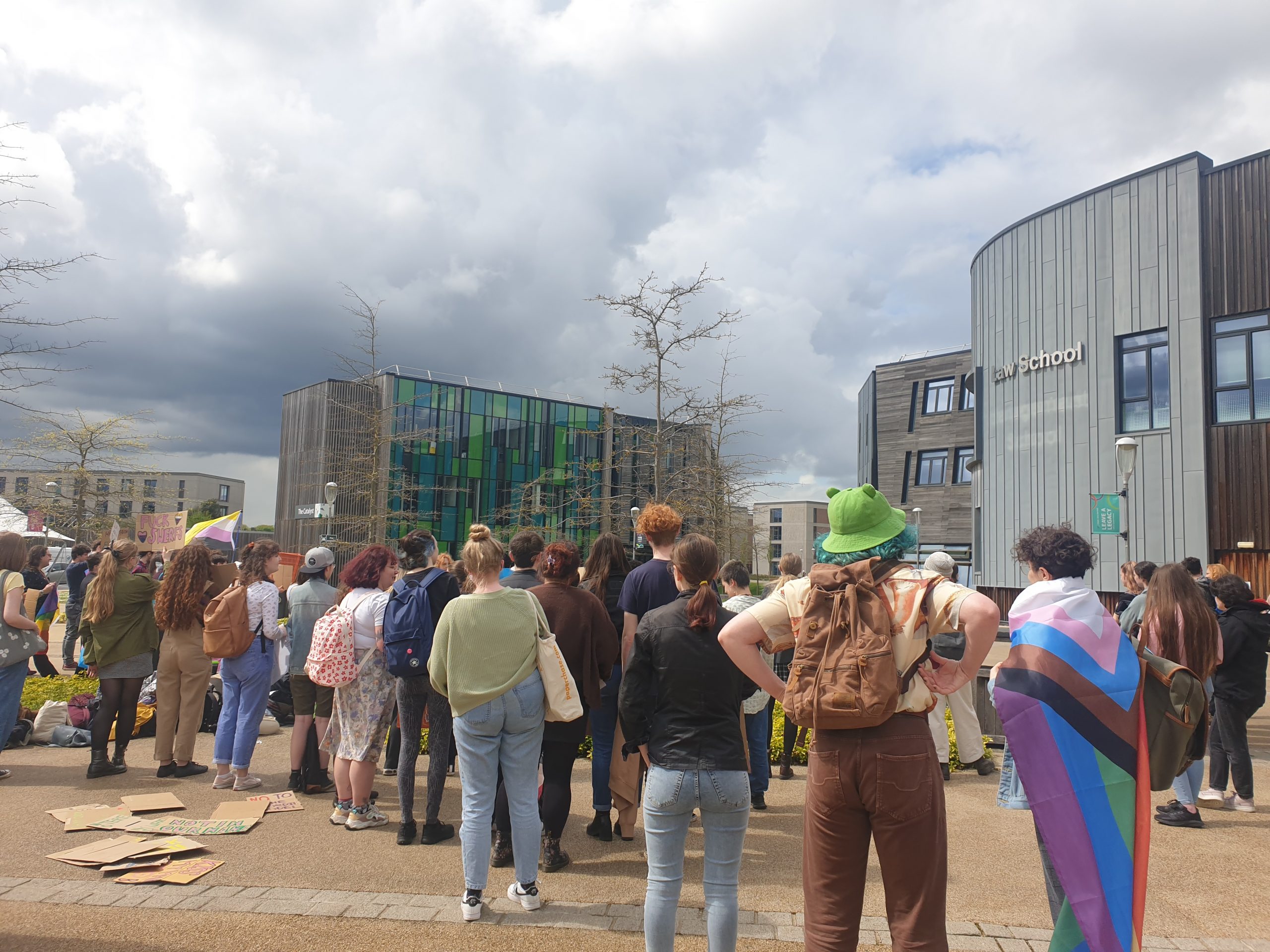 Hosted on Campus East outside the Law and Management Building, societies such as LGBTQ Network and Feminist Society made their way over to set up the protest from 12:30 pm yesterday. The protest itself included student speakers from across multiple societies reading poems, and excerpts from novels, encouraging the crowds to use their voices to fight transphobia and anti-sex worker rhetoric.

Officially beginning at 2 pm, the protest included various speeches from the York Student Solidarity Network, the recently-elected LGBTQ Officers and other student attendees. Raising awareness for issues such as sex workers and transgender students’ rights, the protest lasted around two hours and, except for the weather, went along smoothly.

Wanting to explore the reason behind the protest, Vision interviewed various students who attended.

When speaking to upcoming LGBTQ Officers Ziggy Pavey and Katie Wiseman, they highlighted the huge turnout to the event and the positive atmosphere of the protest:

“Thank you so much to everyone who came, it means the world to us and everybody else to see that level of support and solidarity within the University. There was a wonderful atmosphere throughout the day, even in the pouring rain there was such a feeling of pride and overwhelming support from everyone.

“It would be great to keep those discussions going and to keep raising awareness for minority groups.”

“We’re here because the student community at York stands firmly with those who are facing this oppression and we are not going to sit by idly whilst someone is here at our campus, our home, telling us “you don’t deserve rights”.

“LGBTQ Officers are given a mandate by students at this university to stand up for them and to tell them “this is what is best for students”. Student representation needs to be for the students by students.”

“I have a lot of friends who identify as transgender, non-binary, queer, and obviously my role in my college is to represent our students and their interests, and for a long time, universities and institutions have ignored the welfare of trans, queer and non-binary people. It’s so important that we are able to hear these experiences and allow trans, non-binary and queer people to have that platform to speak up.”

President of the Feminist Society Loz Green also spoke to Vision about the importance of the protest:

“I think as a collective, we’re really proud of the protest held today. The speakers were all amazing, shedding light on the issues surrounding radical feminism and its views of sex workers and trans people. I hope that students and staff who were in attendance can see that they have a strong support system here at York, and further, at FemSoc.

“Feminism would not be feminism without the inclusion and protection of sex workers and trans communities, and I believe the protest organised today demonstrated that with the amazing turnout and enthusiasm from everyone.”

Vision also spoke to Free Speech Society, the organisers of the ‘Feminism and Free Speech’ event:

“The event was successful. Julie spoke intelligently and compassionately on disagreements within the field of feminism, particularly focusing on issues of prostitution and pornography. She was given the opportunity to be challenged on her views and there was engaging dialogue. The student union and university were very cooperative, and the campaign to have Julie de-platformed was unsuccessful.”

“With a modest turnout of about 25 students and staff, the Julie Bindel event went smoothly and the speaker left campus soon after the end of the event. The University of York Academic Registrar, Wayne Campbell, made a brief representation at the start and asked for all to remain respectful, inclusive, and balanced.

“The protest, with approximately 80-100 people in attendance, was colourful, noisy and positive. Some articulated their own experiences, fears and concerns and expressed clearly that they didn’t want to welcome the speaker to campus. Others spoke about wanting all our students, regardless of their gender, sexuality or any other personal characteristic to feel safe, welcomed and loved.

“We are proud of the students involved for the way they conducted themselves, which showed that York students, far from being ‘poshos’ as Julie suggested on Twitter pre-event, are in fact peaceful, intelligent, colourful and interested in making the York students community fair and accessible to all.”