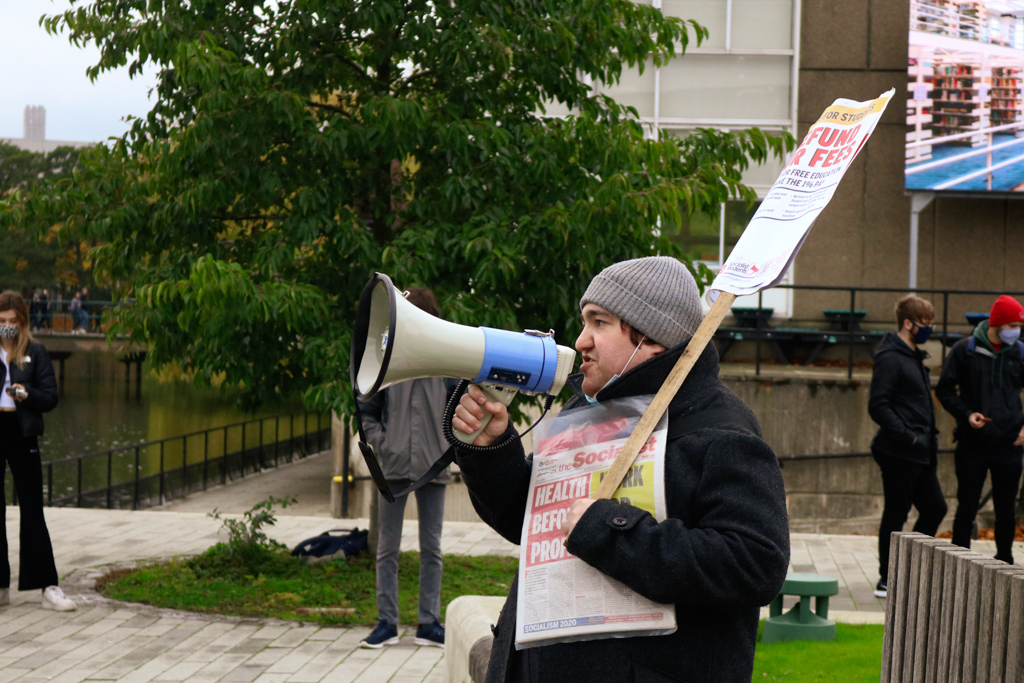 Tuition fee reimbursement and an Emergency People’s Assembly were among the demands set out by students and local residents during a protest on Greg’s Place last Friday.

Anger ranged from beliefs that the University are “lining their pockets” as students are left on a “fundamentally unsafe campus”, to allegations that students were “lured” back to the University “under false pretences”.

The event coincided with another graffiti attack by Revolution Society, although the YSSN denied any affiliation between the organisations.

“We’re trying to bring together a coalition of different groups across campus, staff, and unions, as well as students, to say that we are angry. We are angry at the way that the government and this university have handled this pandemic. We were told that we had to come back to campus so we could get a mixed learning experience, but the reality is that we are going to have to move online.”

While Thelwell asserted that this was important, since any other scenario would put staff in “an incredibly vulnerable position”, he maintained that: “We’re still paying £9,000 tuition fees every year for a course that is not what we were told we would be getting, whilst paying exorbitant amounts of rent, so we can be on a fundamentally unsafe campus”.

The demonstration cited three main demands for their action:

The Socialist Party, also present at the rally, pushed further asking: “why should students be paying tuition fees anyway? … If it was in your hands, you would not be choosing to prioritise building new buildings to attract businesses – you would put your learning conditions and staff working conditions first.”

Students were joined by local citizens in “solidarity” to their cause.

“Stand in unity, and fight back against this appalling government, and this incredibly careless regime that runs this university… on neo-liberal lies”, said a representative of the Trades Union Congress. He stated that they have “no interest whatsoever in you as students – the only thing that matters to them is the profits at the end of it”.

Julie, a primary school teacher from York, and a member of York TUC, further told Vision that: “We think it is really important that different movements all join together, and make a stand against what’s going on.”

This was echoed by a representative from the York Labour Representation Committee, a group founded in 2004, in an attempt to follow the original mantra of the Labour Party before the “delusion and despair” caused by New Labour.

“We feel it’s important to show our support for the students who have been sold a raw deal. The students who were promised a university experience and education were lured under false pretences, and now they’re having to pay exorbitant fees and accommodation costs for an education that they can no longer receive.”

The University of York has been contacted for comment.