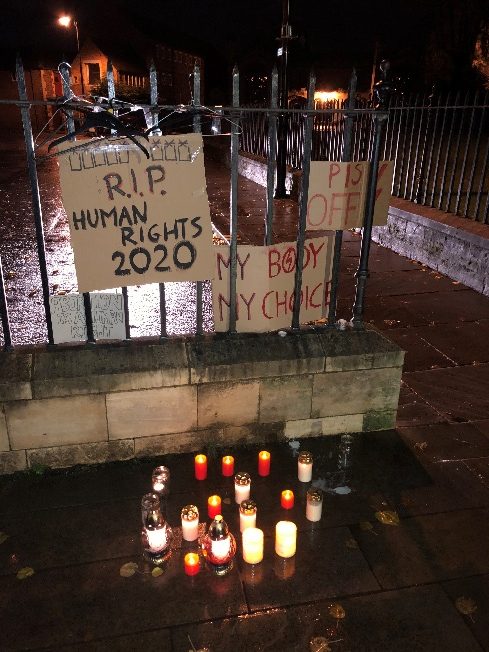 A protest in solidarity with Polish women took place at York Minster on October 29, branded on social media as a “Human Rights Funeral”.

It comes after the Constitutional Tribunal in Poland ruled that abortions in the case of the malformation of a foetus are now unconstitutional, making Polish abortion laws among the strictest in Europe.

Once implemented, new legislation will only allow terminations in the case of rape or incest, or if the mother’s life is at risk.

Organisers were joined by students, residents, and members of the Polish community in York to express their outrage at the decision.

Hundreds of thousands of people across Poland have been protesting the decision since October 22.

According to ABC News, Polish police yesterday carried off protestors blocking off a street in Warsaw.

Attendees of the York protest heard speeches from both organisers and members of the public, who voiced their anger at the decision made by Poland’s top court.

Speaking to Vision, Karolina Widnic, Co-organiser, said: “It was an honour to co-organise this protest last Thursday. I am very grateful to everyone who showed up and showed support.”

“Women’s rights in Poland are under attack, and we wanted to raise awareness of the current human rights violations going on in Poland to non-Polish people or York residents. It was a great event and a great turnout despite the weather”.

Organiser Aleksandra Kowara added: “I wanted to protest here, in York, because I just had to do something. I needed to show that I disagree with how people with uteri are treated in Poland. I wanted to give other people a chance to demonstrate their support as well.”

Kowara continued “I believe that you cannot be indifferent – we have to stand together in the face of oppression. Because human rights concern more than just one country.”