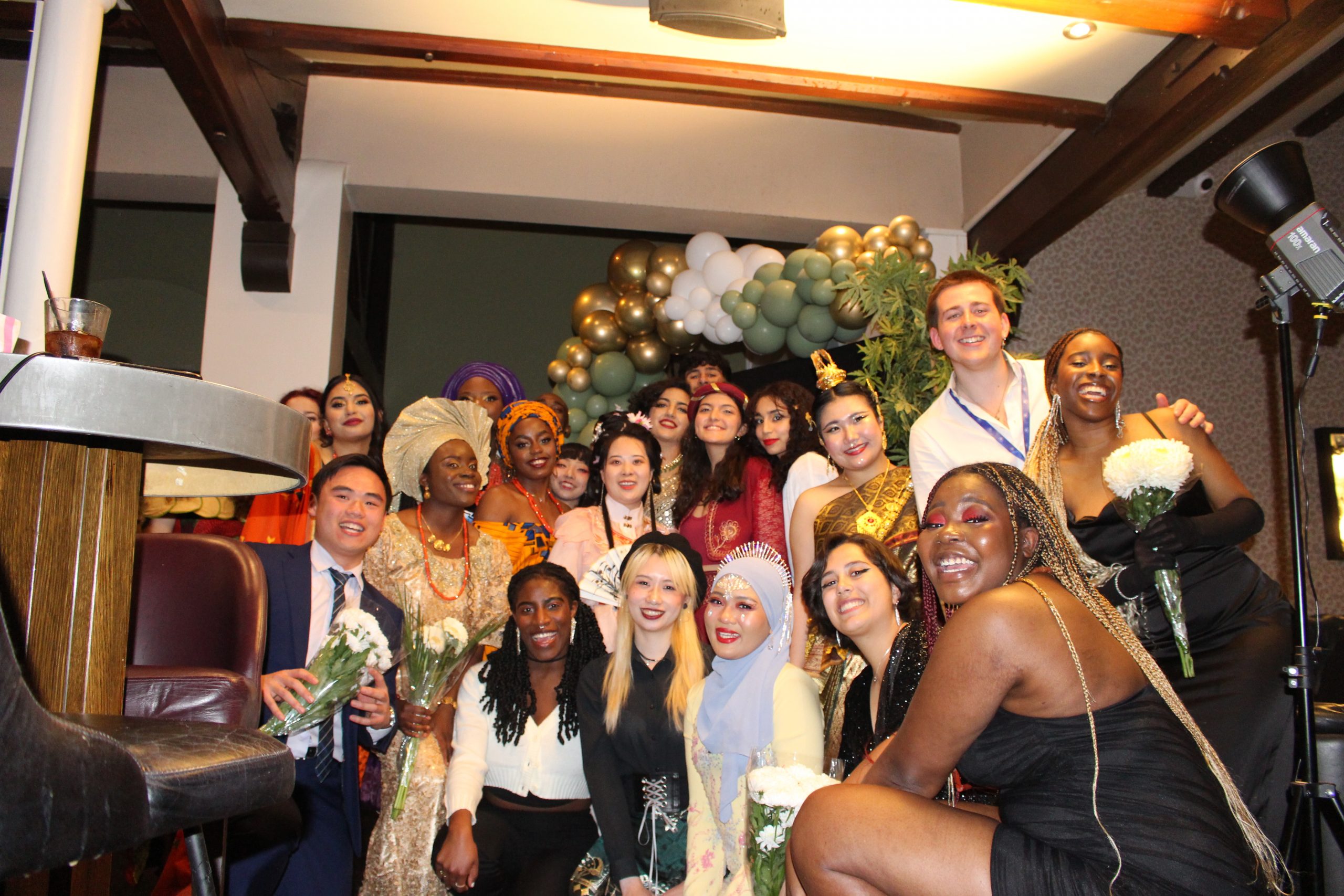 Creating an atmosphere of pure joy, happiness and pride, the models walked with such ease as they showed off their beauty in all modes of fashion; we saw everything from modern trends to traditional cultural dress. The set-up was engaging, with the models walking through the audience. Being so close up to the fashion meant we could fully appreciate the intricate decoration of clothes, as well as ensuring the atmosphere was collective- the models were enjoying themselves rather than being faced with a long runway and a sea of faces. The Biltmore was the perfect venue, with grand lights and decor, as well as lots of drinks and food to hand. As well as the fashion, Timi and the ‘Core 4’ had speakers from local and upcoming fashion brands.

Amongst many students and staff from the University of York were YUSU president Patrick O’Donnell who, in a statement to Vision, said “it was wonderful to have a celebration of culture, music, and clothing from all over the world”. Echoing the thoughts of many, he went on to say “it makes me so proud to be part of such a diverse university community and to see so many talented students who are committed to celebrating equality, inclusion and all that our student body has to offer. It is inspiring celebrations like this that make York such a special place to live and study”.

After being invited to York’s first multicultural fashion show, Vision asked the organisers all about the inspiration, planning and hosting of the hit event.

For those who didn’t attend, explain the idea and essence behind the ‘Regal Beings’ multicultural fashion show

Timi Phillips: The word regal means “resembling, or fit for a monarch, especially in being magnificent or dignified”. This sums up the ethos behind the message we wanted to send to all students from all walks of life. In a predominantly white institution, it is paramount that marginalised groups are reminded of their worth and integral role within our community. It is important that we continue to create platforms to uplift people from all different backgrounds, but also create events to enhance one’s social-cultural awareness.

Explain the night itself. What were the catwalk themes and why did they mean so much to you and the ‘Regal Beings’ models?

Timi Phillips: The catwalks were split into three categories:

Regal beings – a creative and personal exploration of the theme.

Western/Traditional ‘Fusion’ – A modern interpretation of the theme, looking at how traditional clothing has evolved into a new style of its own.

Traditional – Original garments in all their glory! This showed richness and diverse styles globally regarding traditional clothing.

I think it was important to look at the clothing in these three lenses to understand the cultural, personal and multidimensional importance of traditional garments, and why there should be such high regard and respect for other cultures. This was evident throughout the night- it was amazing to see the models feel most confident and take their time in the final walk.

Why did you choose the theme ‘Regal Beings’ as UoYs first multicultural fashion show?

The ethos and message of the show was very clear from the beginning. We all knew that we wanted a variety of cultures to be showcased and uplifted, we knew we wanted models of all shapes, sizes and genders, and we knew we wanted everyone to feel represented. The name came with a Google search of synonyms of royalty and thus was born the name “Regal Beings”.

What was the process of organising the show? Did you run into any issues or setbacks?

Phoebe Durojaiye: Part of the vision for the ‘Regal Beings’ fashion show was to have student involvement from all different backgrounds to showcase the culture and talent of the University of York students. From the music performance to the students speaking about their clothing lines and brands, it was incredible to see what amazing things the students of the University of York have created, and developed.

We really wanted to give them a platform at the ‘Regal Beings’ fashion show to further showcase and let people know about their gifts, talents and hobbies. It was truly such a proud moment for us as a team to see how happy they were to perform and speak about the things they do outside of the university.

Hearing feedback from students and staff who attended that evening, many were inspired. The ability of the speakers and performances to buy into and believe the ‘Regal Beings’ vision when it was an idea, and want to be a part of it, is such a privilege. As always, when planning an event and working with students we came across some challenges, with last-minute dropouts due to academic deadlines or assignments. But, as a team, our ability to work with these changes and adapt on the day was very effective- as the ‘Core 4’, we were the only ones aware of all the last-minute changes.

Irrespective of these setbacks, people still enjoyed the night and had such amazing things to testify about the high quality and standard of the night, different performances and speakers. Knowing that all the students and people participated despite all they may have had to do, whether it be academically, work-related or just personal life… Seeing their commitment to the show was beautiful, especially seeing all the speakers and performances shine. I am truly looking forward to see what the future holds for them.

Was there anything about the process of organising the night or the night itself that surprised you?

Shareef Fang: That anything can go wrong was my first ‘surprise’ about the process of organising.

We brought the wristbands as tickets two weeks ago and they went missing with no information available for about 4 days and arrived two hours before the fashion show started. Also, there was one model who dropped out at the last minute saying he could not do it because he got a very important exam which was definitely a valid reason. However, the result of the show was amazing- I knew it was gonna be good, but the night still exceeded my expectations. There were a lot of people during and after the show that came and greeted me, saying congrats. I remember particularly that there was one who said ‘York needs more of this’. That was the moment I felt like we actually did a great job of sharing and promoting the multicultural fashion show.

The night included various speakers and music performances- what was it like working with them to deliver the ‘Regal Beings’ fashion show?

Idorenyin Akpan: Organising the show was incredibly stressful. From recruiting the models to securing funding, it was all so overwhelming. There were moments of joy when you saw others just as excited as you about what the impact of this kind of event could be. There were also other moments where we all genuinely thought the event might not happen. We were all so anxious that maybe we had not done enough to promote the event, and that tickets wouldn’t sell.  Of course, those worries were unfounded.

There were also several zoom calls, group chats made and late-night brainstorming sessions regarding organisation and execution of the multicultural fashion show. But, overall, the time and effort put into it was all worth it. Trying to navigate each other’s university work and independent commitments was a challenge at times, but we were able to communicate effectively and push through.

The event had a HUGE turnout- why do you think the show resonated with and attracted so many people?

Moesha Snoek: The multicultural fashion show is the first of its kind in York. One of the few big projects organised by and for BAME and international students. We feel like it provided a safe place for people to come together, celebrate and learn about different cultures. It’s something that some students might feel like was missing, and this was a place where they could do this. As someone said after the show, “York needs more of this”- it shows that we organised something people actually enjoy and wanted to attend. We think that this combination of the different cultures and the overall plan of the evening is a combination that attracts lots of students.

Finally, what impact do you think the ‘Regal Beings’ multicultural show has had and do you have any plans for the next fashion show theme?!

Timi Phillips: The first plan we have is rest!! The team and models have worked so hard and they deserve all the good fortune coming their way :) As the ‘Core 4’ team, we have a few more logistics to sort out such as final invoices, the Yu Fund report and, more excitingly, to release the pictures!!! We are also thinking of going up for the “Love York Award”, so vote for us. In terms of the impact that we think the fashion show had, I think students feel more represented and are reminded of the pride they should have in their respective cultures. I hope that any impact we had was positive, and we want to thank everyone for coming!