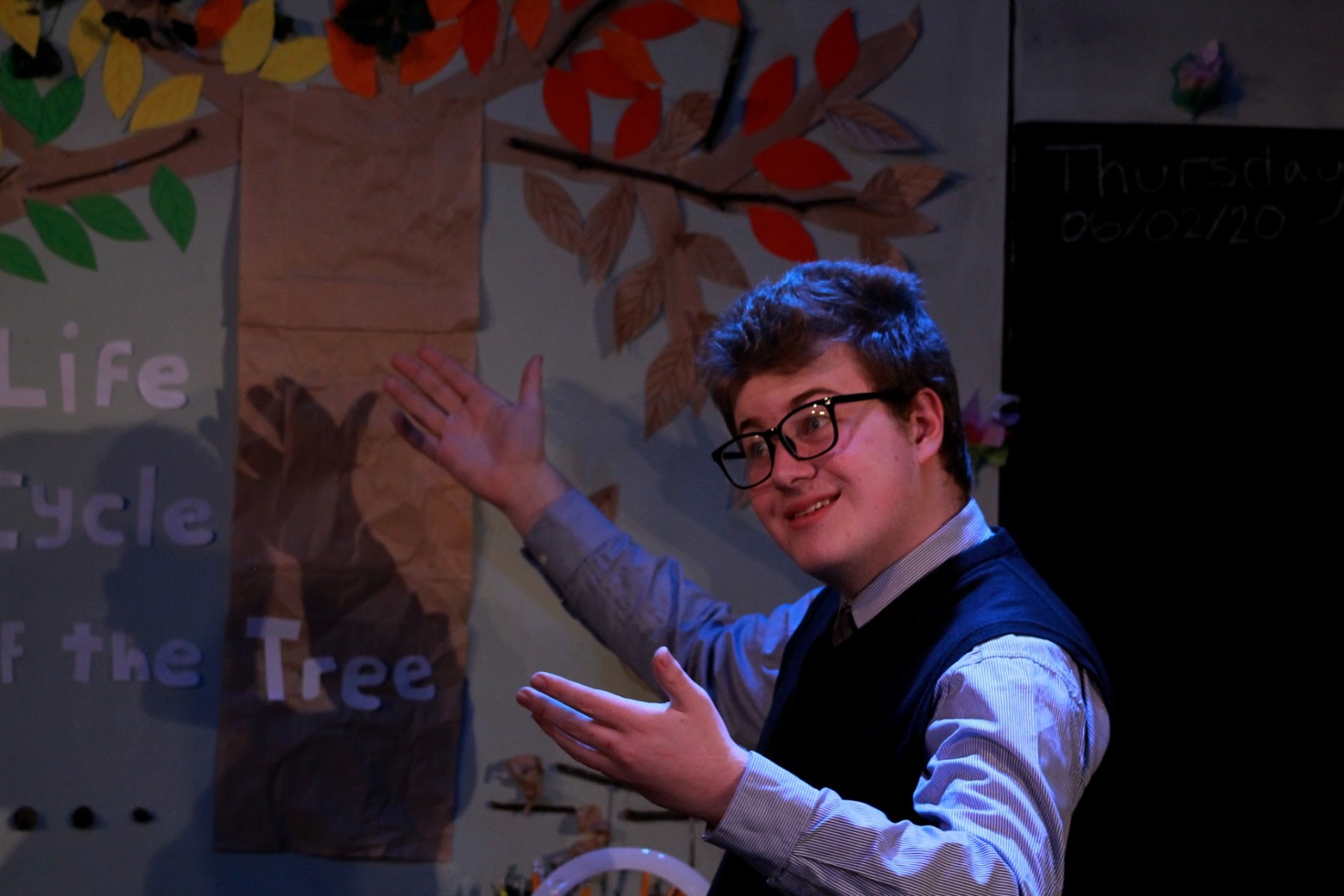 Art projects pinned on pistachio green walls, little desks and chairs, pots of felt-tip pens and coloring crayons, bookshelves and little snacks in lockers, a poster of baby Yoda saying ‘Baby Yoda says be nice to everyone’: the Drama Barn was superbly transformed into a classroom by Scarlett Wood for DramaSoc’s week 5 weekend show. It was quite unsettling but rather nice in the end to be back in such colorful and arty walls.

Class, a play co-written by David Horan and Iseult Golden (not students at the university), plays with the spectator’s relationship to schoolday memories. In comes a man. Round face framed by black rectangular glasses, a shirt and a sleeveless jumper proudly tucked into his trousers: there is no doubt, this is the teacher (Abel Kent). His outfit is enough to make his entry special. A few seconds later, a knock on the door. It’s Brian (Brad Hodgson). We understand really quickly that he has a meeting with the teacher Mr McCafferty to talk about his son Jayden. We just need to wait for his wife, Donna. This is the start of seven exquisite minutes of waiting. By nature, theatre isn’t really compatible with the act of waiting. If nothing happens on stage, actors and spectators all feel very awkward. But what a ticklish and attractive awkwardness it is! Let’s all wait for Donna!

There she is (Aisling Lally), a short brunette girl with playful eyes, a light pink jumper full of sparkles and a pair of jeans on. So the meeting about Jayden begins… It turns out Jayden is experiencing learning difficulties. Mr McCafferty would like him to see an education psychiatrist, which triggers bad memories of difficult times in school for Brian and Donna…

The originality of this play lies in its writing. Class is a system of two parallel stories: the first one follows the meeting of Jayden’s parents with his teacher, the second one is about Jayden and a schoolmate, Kaylie, that stay after school to join the ‘homework club’ with Mr McCafferty. The beauty of this construction is that both of the parents also play one of the two kids. At the end of each scene, a projector goes round and a light school-bell rings, indicating the change of characters for Aisling and Brad.

The contrast in the actors’s performance as adults or kids was quite surprising. Brad Hodgson as a child was really perfect. The innocent look on his face, and his very flexible posture accompanied really well his tone that was sweet but not too childish. However, as an adult his performance wasn’t quite as well mastered. At first he seemed like a very cool dad. His accent and uneasiness made him rather friendly to us. However, his interpretation of anger wasn’t nuanced enough, which is a problem since his character has anger management problems and is angry most of the time. He talked with his teeth tight, which made it much harder for the spectator to understand him.

This lack of nuance is worsened by a flaw of the play: once the climax is reached (it gets physical, you can’t miss it), the tension just stagnates for what seems like too many minutes. Brian seems stuck in anger, Mr McCafferty in fear.

Aisling Lally on the other hand, offered a rather tempered and down-to-earth mother without over doing it, but her performance of a 9-year-old wasn’t as good. She was an over excited Little Miss Chatterbox, running around everywhere, and adopted a caricatural tone. She was nevertheless quite cute.

The two parents have rather tensed exchanges. They are separated, he would like to come back home but she refuses. As the teacher leaves the classroom for a few minutes, they share a rare moment of complicity. Brian draws a really silly drawing on the blackboard, and Donna scares him by faking the return of the teacher, just as if they were nine year-olds themselves. No anger during those minutes, only chuckles and sincere smiles.

However, Abel Kent does come back, and he is really impressive as a teacher! He managed to find the right tone in all circumstances, highlighting the right amount of ideas as he talked. You can hear he really believes wasting a child’s potential is a tragedy. He dedicates his life to fighting against tragedy, but is stuck in one.