Thomas Jones’ high energy production of You’re a Good Man, Charlie Brown (written by Clark Gesner) is a captivating mix of nostalgic innocence, existential crises and perfectly synchronised choreography. Jones manages to capture the right level of audience interaction without the musical becoming a cheesy pantomime and Charlie Brown’s (Jamie Bowman) questioning of his own self-worth is beautifully handled with comedy so that the whole production flows smoothly without becoming jarring or hyperbolic.

One of the most striking features of the production is the set. It overflows off the main playing stage and into the entrance corridor, where certificates of merit for each character decorate the walls, and Lucy judges the audience’s dress sense. Both the set and props are bright and effectively evoke the style of the Peanuts cartoons.

The main stage is carpeted with astroturf painted as a baseball field, and the pitcher’s mound acts as a stage within the stage for focusing on one character, almost like a second spotlight. In a musical with so many inner storylines this allows each character their moments to take centre stage and command the audience’s attention. The set also continues up the seats (also covered in Astroturf) and onto the ceiling where stage lights are hidden inside clouds and the theatre’s beams become trees from which Snoopy (George Morgan) can swing. All of this successfully creates the effect of fully immersing the audience into the production.

My one criticism of the set would be that, whilst Snoopy’s doghouse added an excellent layer to the stage, its positioning on the direct right of the audience meant that at least half of them had to sit at quite an extreme angle just to actually see what was going on. They were then unfortunately unable to truly enjoy Morgan’s antics and excellent solos (which were one of the show’s greatest assets, might I add). On a side note, it is also worth mentioning that the set will be sold off to raise money for Tang Hall SMART Ltd. which uses music to help underprivileged children.

This immersion is taken further during ‘recess’ or the interval, where we are asked to ‘stick around… for some fun’. This takes the form of traditional children’s entertainment, including bubbles, Frisbee and a game of baseball that left Linus (Joe Mackenzie) a tad winded, as well as the classic children’s endeavour of Schroeder’s (Freddie Cambanakis) petition to get Beethoven on Mount Rushmore. The whole cast did an admirable job staying in character whilst improvising, leaving them with no break in the production. Obviously a willing audience is a massive advantage when attempting this, but the cast did sterling work in getting an initially tentative audience playing with them, and the recess was definitely a highlight of the production which sets it apart from the vast majority of musicals.

The band, usually at risk of becoming an underappreciated star amongst such a high-energy cast, takes an incredibly active role and their performance warrants special mention, particularly when faced with such an animated performance that they occasionally have their music inadvertently knocked over. Kit Hardman’s piano playing syncs perfectly with Schroeder’s mime on the classic purple piano, cunningly hidden in the Lucy’s (Betty Jones) psychiatrist’s stand. Jones herself is also commendable in her performance, managing to create a ‘crabby’ character who is also incredibly likable in her dreams of becoming queen, her educational duty to Linus and marrying a pianist, despite being unimpressed by Schroeder’s rendition of Moonlight Sonata. Her charm as a character is greatly merited by the intentional off-key shrieks during her singing that will undoubtedly always get laughs.

Often the audience is the greatest reviewer, and here this is no exception. Not only did every solo end with enthused applause and cheering, but the audience also felt sympathy for the characters, demonstrating how effectively the cast reverted back to primary school children. However one cannot help but feel that there was slight miscasting, and swapping actors into different roles might be beneficial. Both Mackenzie and Cambanakis performed well, but perhaps swapping them so that they played the other’s character would improve the production, allowing an actor potentially more suited to the babyish role of Linus to take up the blanket. Despite this, and other minor issues, such as in the set layout, and perhaps toning down the accents in some cases, this was an excellent production and a strong contender for the National Student Drama Festival 2015. 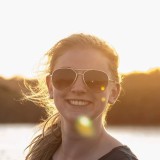